Britney Spears takes us behind the scenes of the release of her latest project, the new Twister game. 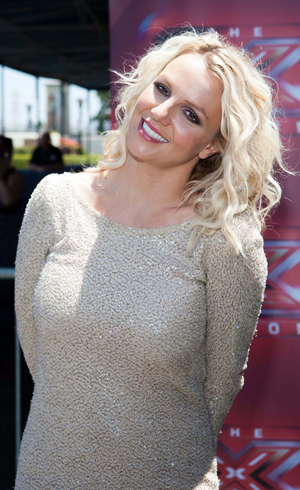 Want to play Twister with Britney Spears? Sounds like every guy’s fantasy back in 1999. Well, now that dream is coming true… kinda. Spears is the first singer to revamp the classic game with a twist (ha!) all her own.

Songs in Britney Spears’ Twister Dance include a remix of Spears’ “Till the World Ends,” along with the following songs:

Spears is even starring in an official video for the Twister Remix of “Till the World Ends,” which is set for release on Sept. 9.

The singer is quite the busy woman these days — she’s gearing up for her primetime judging gig on The X Factor and her future wedding to fiance Jason Trawick. Contrary to rumors, she’s not getting cold feet about walking down the aisle. Spears was spotted without her engagement ring last week, sparking questions about her commitment to Trawick.

Actually, it was all a misunderstanding.

“She was not wearing her ring last week at court because she took it off during an Elizabeth Arden [photo] shoot, and Jason was holding it for her,” a source told People. “He simply forgot to give it back until later.”

The couple won’t get married until after she’s done with this season of The X Factor, though.

“Even though Britney has been married before, she looks at her wedding to Jason as her real wedding,” the source added.

We’re excited to see Brit on television again! Until then, we’ll be playing Twister Dance.