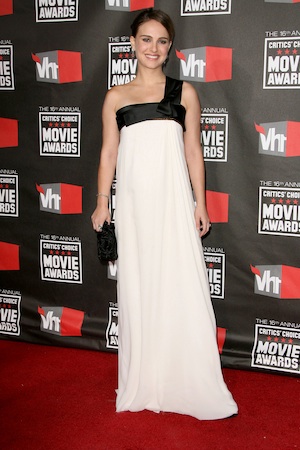 Natalie Portman steams up fashion as she goes topless for Dior. The beautiful photos for the Diorskin Nude ad campaign are tasteful and sultry. One photo shows Portman leaning over an expertly-placed sofa arm while another photo just shows Portman staring into the camera with a sexy side pose.

In the photos Portman wears her favorite Dior lipstick, 169 Grege, which is part of Dior’s Diorskin Nude lip color line. “I chose the color Grege because it’s the one I’d pick to wear myself,” says Portman. The number [169] contains different dates that are important to me and my family.”

Always charitable, proceeds from 169 Grege will benefit the Free the Children Association, a non-profit organization that aims to increase educational opportunities for children in developing nations. In April 2012, Natalie Portman was named an ambassador for Free the Children. “As a mother and the organization’s newest ambassador, I am grateful to Free the Children for giving me the opportunity to channel my passion and love of children into meaningful action that furthers the education and leadership of young women for years to come,” said Portman.

Natalie Portman is also the face of Christian Dior’s Miss Dior fragrance. Portman went topless for Dior back in January 2011 for a Miss Dior campaign. That campaign was far sweeter than the sultry campaign for Diorskin, but nonetheless sexy. People magazine reports this is Natalie Portman’s first Dior ad since John Galliano was removed as head designer for the fashion label.