The ESPN commentator America loves to hate, Skip Bayless, is once again showing why there are multiple Facebook accounts dedicated to hating on the 60-something host. 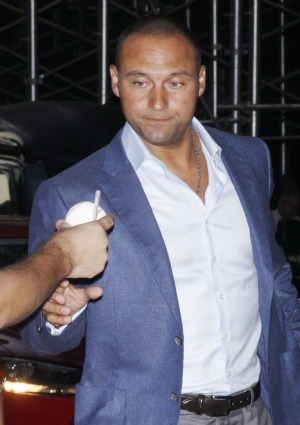 Wednesday “HGH,” “PED” and “Jeter” were trendy on Twitter, thanks to Bayless sounding off on ESPN’s First Take about the 38-year-old ballplayer’s age-defying performance with the New York Yankees this season.

“I am shocked by what I am seeing from Derek Jeter right now — in 2010, two seasons ago, he hit a career low 270,” one of ESPN’s answers to shock jock said. “All of the sudden, this man turns 38 years old in June and already he has more hits than last year in 2011, and already he has doubled his home run total.”

“I am seeing a whole new guy,” Bayless continued, stressing he “defended” critics who formerly said Jeter was “washed up.”

While Bayless contended Jeter still had life in him, even while knocking on 40, he said there was “no way” he could have seen him being an MVP candidate.

“Are you kidding me?” he said, through interruptions from fellow mouthy anchor Stephen A. Smith. “You would have to have your head in the sand or your head somewhere else to not at least wonder, ‘How is he doing this?'”

Bayless further brought up Victor Conte — who did time for his role in distributing steroids — and his assertion that “many of the top players in baseball… say there is rampant use of synthetic drugs in the sport of baseball today.”

No doubt, both San Francisco Giants outfielder Melky Cabrera and, as of Wednesday, Bartolo Colon of the Oakland A’s have been suspended for 50 games after failing drug tests.

Minka Kelly steps up to the plate with Jeter, again >>

Bayless contends that the performance-boosting Human Growth Hormone is only tested for once by the MLB — and that’s during spring training, insinuating that some HGH users, including star players like Jeter, could fall through the cracks.

The insinuation that Jeter uses drugs to get an edge in his advancing age not only rocks Yanks’ worlds but all of baseball because, through the years, he has been looked upon as untouchable. With the exception of his dating life — lest we forget he dated Mariah Carey back in the 1990s and has been linked to actresses Jordan Brewster, Minka Kelly and Jessica Biel — even TMZ appears to have taken an off-limits approach to the sports star. And maybe that’s because, well, there’s “Nothing here to see, folks. Move on.”

Or maybe it’s all in the perception.

Back in 2010, Jeter’s name came up during the latest (at the time) scandal over performance enhancers. Jaws seemed to drop at the mere mention that Jeter was somehow involved.

New York baseball blogger Sean Pidgeon put it like this: “If any baseball player is worthy of canonization, it’s St. Derek. Jeter has been long known to succeed with poise, intangibles, and that preternatural baseball instinct that only comes with an almost mystical love of the game that only the greats have.”

Talk about man love! Can “man love” blind fans (and commentators) from the truth? Or is Skip Bayless just being an idiot again?