Icon Mariah Carey refuses to share the American Idol stage with Nicki Minaj — or any other female for that matter. 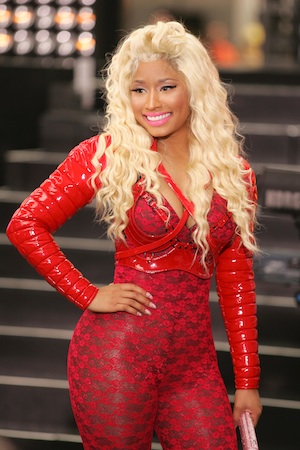 Mariah Carey is reportedly furious over the possibility of Nicki Minaj on American Idol. According to the New York Daily News, Carey wants to be the only female on the American Idol judging panel and was quick to let Idol producers know she does not support Minaj being on the show.

The rumor mill went into overdrive yesterday when Nicki Minaj tweeted she had a major announcement to her fans.

“Ok barbs, getting another x-ray. When I get back, I’ll have a surprise for u. *kisses u, hugs u*”

E! Online speculated that Minaj’s big reveal would be her official announcement as an American Idol judge. While it turns out her big reveal was not related to American Idol, media outlets still believe Nicki MInaj is on the short list to be on the Idol panel.

Nicki Minaj is bringing her “Super Bass” to American Idol >>

When Mariah Carey received word she might be working with Nicki Minaj, she slammed the phone down on American Idol producers mid-conversation, according to TMZ. Sources told TMZ that Mariah Carey insists she be the only woman on the Idol panel.

Even so, Us Weekly reports American Idol is extremely close to finalizing a deal with Nicki Minaj. Their sources say contracts are in the final stages.

“I’m not sure the deal is completely done yet, but yes, she is definitely doing it.” The source continued, “A few more things to sign off on but its happening.”