There have been many guesses and rumors as to who Kelly Ripa’s new co-host would be. But “sources” are now saying Michael Strahan has landed the job. 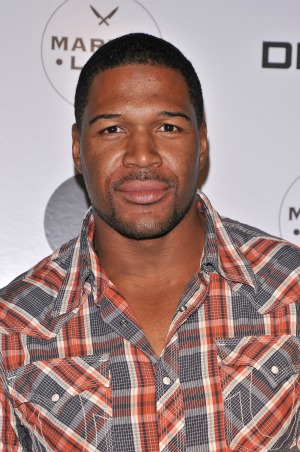 The rumors keep coming. On Monday, Live! with Kelly announced that they had found a co-host but wouldn’t be telling us who that co-host would be until Sept. 4.

Ben Grossman of Broadcasting & Cable, an industry magazine, is now reporting that Michael Strahan will be that co-host.

Strahan is a former NFL defensive player who also briefly starred on the Fox sitcom Brothers.

Strahan’s name may be unfamiliar to many of Live!’s audience, as he is little known outside the football world.

“Even when he assumes the new role, Strahan is expected to remain in his role with Fox NFL Sunday, as first reported by Joe Flint in the Los Angeles Times,” said Grossman.

Strahan may be the least expected of all the candidates who have been named so far. The list includes Seth Meyers, Ripa’s husband Mark Consuelos and Josh Groban—and today Us Weekly even put Anderson Cooper‘s name in the hat.

The geography of the show may make Michael Strahan’’s name a little less likely. Live! with Kelly is shot every weekday in New York, while Fox shoots all its NFL programming in Los Angeles.

Grossman said he had heard the news from “multiple sources with knowledge of the situation,” but he also said that an ABC rep had declined to comment.

Since Regis Philbin announced he was leaving, the announcement of the new co-host has been one of the most anticipated in the TV world. All summer, Ripa has had many guest hosts helping her on the show, and Strahan was one of those guest hosts. But all of the guest hosts have been presumably trying out for the permanent co-host position, and it wasn’t until Monday that the show’s producers confirmed they had decided who the new co-host would be.

The new season of Live! with Kelly will kick off on Sept. 3, but the new co-host won’t start until Sept. 4. ABC is working hard to keep that name under wraps until then.

The Associated Press is also reporting on Strahan as the new co-host.