Does Jimmy Kimmel have enough comedy to take on David Letterman and Jay Leno? Well, we’re about to find out. 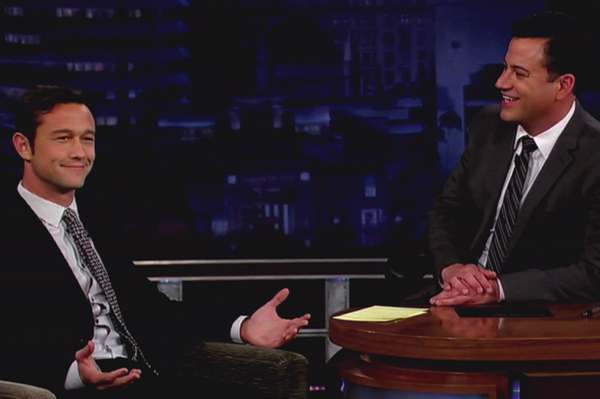 Jimmy Kimmel is newly engaged and ready to fight. No, he’s not looking to fight his fiance — he’s joining the intense battle for late-night greatness, going up against seasoned combatants Jay Leno and David Letterman.

Starting in January, Jimmy Kimmel Live! is moving to the 11:30 p.m. EST time slot, ABC confirmed on Tuesday. The 43-year-old funnyman will swap time slots with the long-running news program Nightline in hopes of getting the network a larger share of the highly sought-after late-night audience. According to ABC, the popular news show will make up for the expected loss in ratings by adding a new primetime edition, starting in March 2013.

ABC has problems with Jimmy Fallon hosting the Oscars >>

“It’s all a bit scary, too, but it’s very exciting,” he said in a statement. “This was just a decision that ABC made on their own. We didn’t push them or bully them.”

The network is highly confident in Kimmel’s ability to take on the two big guns in the late-night circuit.

“It’s a huge move,” ABC/Disney president Anne Sweeney said. “This is Jimmy’s moment. It’s a culmination for him. We are looking at a landscape with two entrenched guys who are starting to fade. Their audiences are diminishing, and Jimmy, who has now been on television for 10 years, is continuing to grow.”

“Jimmy is in the zeitgeist,” Sweeney added. “When his videos go viral, they really go viral.”

Kimmel isn’t so sure his performance is the reason why ABC moved him to the new time slot. “I think they did it just because it makes financial sense,” he joked.

Do you think Jimmy Kimmel can win against David Letterman and Jay Leno?