Today marks the 25th anniversary of Dirty Dancing. Hard to believe that it’s been 25 years since Patrick Swayze and Jennifer Grey crawled across the dance floor to make out with each other. Have you hugged your Dirty Dancing DVD today? If not, here’s why you should dust it off and celebrate Dirty Dancing’s 25th anniversary… 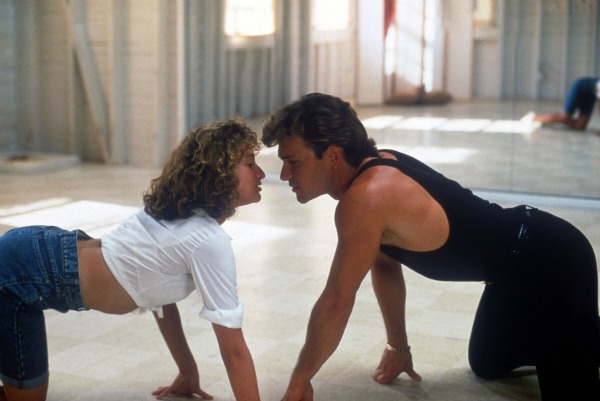 Great excuse to bust out your Dirty Dancing T-shirts

When we asked Jennifer Grey if she has ever told husband “Nobody puts Baby in a corner,” she said, “Uh….no. I think he would divorce me if I said that to him. And I wouldn’t blame him.” Still, we all know you have a “Nobody puts Baby in a corner” t-shirt, so don’t even try to pretend that you don’t. Break that puppy out, throw it on and cozy in for a couple hours of Dirty Dancing goodness.

Of all the favorite Dirty Dancing scenes, when is the one of the dorky sister “singing” going to get the recognition it so richly deserves? Maybe you have to have a sister to appreciate this particular gem. Let’s forget for a moment that Baby’s sister looks nothing like her, that she’s a complete dork and that her voice would send alley cats scrambling for cover. What we really want to know is if that’s Newman from Seinfeld in the background about 15 seconds into this clip. Yeah, okay, so we’ve watched this scene a few times. Don’t judge us.

Jennifer Grey says that acting with Patrick Swayze was fantastic and doing the movie was one of the greatest experiences of her life. So When was the last time you took time out of your day to pause and reflect on the passing of Patrick Swayze? That long, huh? Time to redeem yourself by watching Dirty Dancing and pretending that you are a lovesick teenager. Granted, a few of Patrick’s lines and moves are a bit toe-curling (it’s best if you fast forward through the heart thumbing “ga-gon, ga-gon” and air-guitar parts) but he more than makes up for that with his coolness and his biceps. Here’s a little teaser, in slow mo. You’re welcome.

Here’s a little something for the boys in the audience. Dirty Dancing is one of those movies you watched as an innocent teenager until your mom took the VHS tape away, and you thought it was the most brilliant cinematic effort of all time. Then you watch it as an adult, and you’re just a wee bit embarrassed that you were so enthralled by it (Top Gun, we’re talking to you, too). The scene with Baby, Penny and Johnny went over your head as a kid, but you watch it now and all of a sudden you’re a little uncomfortable. Somebody’s havin’ the time of their life, and it ain’t the girls. The magic happens about a minute into this clip…

You can tell your annoying co-worker to “go back to their playpen,” and put the office grunt in his/her place by saying, “Just put a pickle on everyone’s plate and leave the hard stuff to me.” And if you really want to put someone in their place, you can come at them with a Dirty Dancing classic, “Some people count, and some people don’t.” Ouch.

21 hrs ago
by Julie Sprankles