Robin Roberts puts on a brave face while she battles MDS, but the physical and mental demands of treatment might be taking a toll. 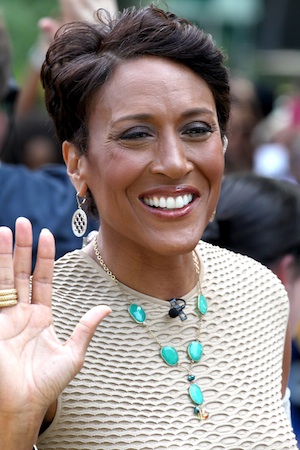 Robin Roberts seems to be struggling as she undergoes treatment for myelodysplastic syndrome (MDS). The rare blood and bone disorder comes just five years after Robin was diagnosed with breast cancer in 2007.

“My needle was past ‘E’ when I left here a couple of weeks ago, but I’ve got a full tank, so watch out,” said Roberts. “I haven’t taken this much time off in quite some time.”

While Roberts is doing her best to stay strong and positive, the mental and physical toll of MDS is no doubt draining for her. During her time off from Good Morning America Roberts traveled to Rome, Italy for spiritual guidance and comfort. She tweeted as she visited the Vatican, “Given special access to the Vatican in Rome today. Saying a prayer for all who have prayed for me. XO” While on her way back to the United States from Italy, Roberts tweeted her gratitude for the trip. “Grateful to Italy for renewing my spirit/soul.On my way back to good ol USA! There’s no place like home. Blessings to all. Happy Sat… :)”

Robin Roberts confirmed on Twitter she is scheduled to undergo a bone marrow transplant in September 2012.