Hilary Swank is a single woman again. The actress ended her five-year relationship with agent John Campisi earlier this year, her rep confirmed. 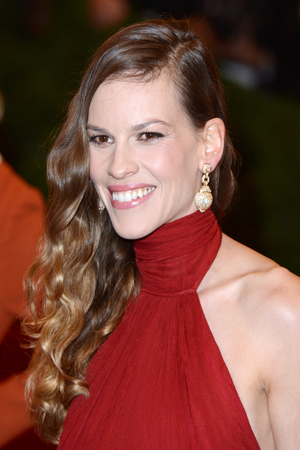 The pair started dating in 2007 after Swank split from her husband, actor Chad Lowe. The actress didn’t rule out another marriage when she spoke with InStyle in a 2010 cover story.

“I believe in the sanctity of marriage. John and I, you know, we were both in long marriages and it’s not something that we need to rush back into,” she told the magazine of her relationship with Campisi, an agent. “Friends of mine and I talk about this. Does someone come into your life for a certain time, and then you are supposed to go your separate ways? There’s a part of me that thinks that’s true.”

Wonder if that’s what happened in her relationship with Campisi?

Swank hasn’t had time to nurse her wounds — or find another relationship, for that matter. The actress has been busy working all summer filming Mary & Martha on location in North Carolina and South Africa. The film — made for BBC — is a drama about two women on a mission to end Malaria after the illness claimed their sons.

The film — co-starring Brenda Bleythn and James Woods — is scheduled to air sometime next year.