Think Maksim Chmerkovskiy slapped Hope Solo? She’s not backing down, but sources say he’s planning a legal attack to get her to retract her statement. 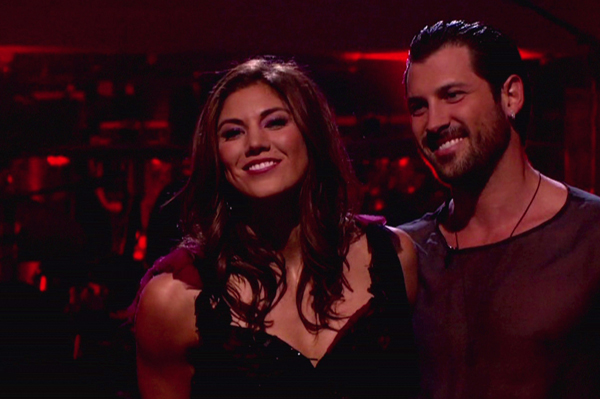 Hope Solo shocked Dancing with the Stars fans last week when she claimed former partner Maksim Chmerkovskiy manhandled and slapped her during their rehearsals for the hit ABC show.

“He manhandled me in rehearsals from the start, pushing me, whacking my stomach, bending my arms roughly,” Solo confesses in her upcoming memoir Solo: A Memoir of Hope. “I thought that was just how it went — how dancers worked with each other. But it kept getting worse. … One day, Maks was trying to put me in a certain position and hit my stomach so hard with his open palm that I had a red handprint there for the rest of the day.”

She also writes that the Ukrainian “bad boy” dancer slapped her during a Halloween rehearsal. “He wanted my head in a specific position. To achieve that, he slapped me across the face. Hard,” she added.

Chmerkovskiy hasn’t responded to the claims directly, but he did write a couple of cryptic tweets.

“Always hated hypocrites and liars … but when someone is both AND an opportunist, I just feel bad for them. Can’t win at someone’s expense …” he tweeted on Friday, adding “life’s best lessons are the ones that you smile through.”

However, he might be planning a more aggressive attack behind the scenes. A source told The Huffington Post‘s Rob Shuter that Chmerkovskiy and ABC are considering their legal options and might sue the champion soccer player.

“Maks is one of the nicest guys in the world. This is 100 percent not true,” the source said. “At the moment, Maks and ABC are not making any public statements, as they are considering legal options. Not only did Hope not tell the truth in the book, she also signed a contract with the producers of DWTS and could be in breach of contract.”

Solo, meanwhile, is sticking by her claims.

“Hope is standing behind what she wrote and has no intention of issuing an apology. No one has tried to muzzle her yet — today she did a bunch of interviews, including ESPN,” another source told the HuffPo.

Looks like this is going to get very, very interesting.