Tell us how you really feel: Hank Williams Jr. called out President Obama during a Friday night concert in Iowa. 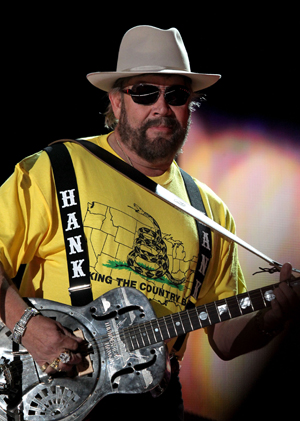 Hank Williams Jr. is at it again. The country singer used his Friday night performance at the Iowa State Fair to blast President Barack Obama.

“We’ve got a Muslim president who hates farming, hates the military, hates the U.S. and we hate him!” Williams Jr. told the crowd, according to the Des Moines Register. The response was pretty positive, the paper said.

We can’t say the country singer’s comments are that surprising, given his past statements. The son of country legend Hank Williams drew fire last October for some comments he made on FOX & Friends comparing President Obama to Hitler.

Williams Jr. told the hosts that House Majority Leader John Boehner made “one of the biggest political mistakes ever” for playing golf with Obama last year.

“You used the name of one of the most hated people in all the world to describe, I think, the president,” host Gretchen Carlson said.

“That’s true,” Williams replied. “But I’m telling you like it is.”

Those comments got his song, “All My Rowdy Friends,” pulled from ABC’s Monday Night Football. He later apologized for his words.

“I have always been very passionate about politics and sports and this time it got the best or worst of me,” he wrote on his website after the public outcry.

“The thought of the leaders of both parties jukin [sic] and high fiven [sic] on a golf course, while so many families are struggling to get by simply made me boil over and make a dumb statement,” he added.