We didn’t expect this: Nicki Minaj is finalizing negotiations to join Mariah Carey as a judge on American Idol. 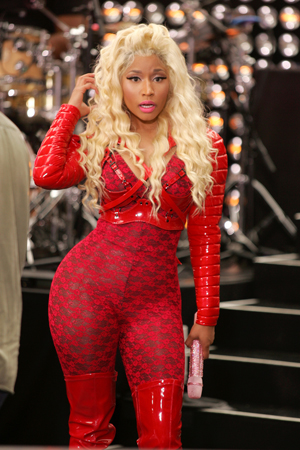 Rapper Nicki Minaj is on top of the music world, thanks to her “barbz” and songs like “Starships.” Apparently, she’s about to take that popularity to FOX — she’s rumored to be joining Mariah Carey at the judge’s table on American Idol.

“I’m not sure the deal is completely done yet, but yes, she is definitely doing it,” an insider told US Weekly. “A few more slight things to sign off on but it is happening.”

The news comes just weeks after both Steven Tyler and Jennifer Lopez announced their departures from the show after two seasons. Carey was confirmed as a judge in July, complete with a rumored $18 million contract.

“As a singer, songwriter and producer, it’s going to be fun and rewarding to help find new talent and give back with American Idol,” the mother of “dem babies” said in a statement. “I can’t wait to channel my creative energy as a part of this show which is a massive global phenomenon.”

Carey reportedly gets to choose who joins the show as her co-judges. If that’s true, we can’t imagine she’d approve Minaj — two divas at one table? Not happening.

Still, it seems that the Minaj deal is almost done, leaving one judge’s spot open (Randy Jackson is said to be moving to a “mentor” role). Who will take that spot? It’ll likely be Nick Jonas. “I am being considered to be a judge on American Idol,” Jonas tweeted after rumors emerged. “And it would be a dream come true if it happens.”

Our biggest question: Who will get the bigger paycheck? Carey might have had a longer career, but Minaj is definitely the bigger star right now.