Each month Candace of Beth Fish Reads recommends the best in audiobooks, the perfect way to read when you’re on the move. For August: Mark Deakins’s narration of Peter Heller’s adult dystopian novel impressively captures the personality of the main character in this introspective story of one of the few people to have survived a pandemic outbreak of flu. 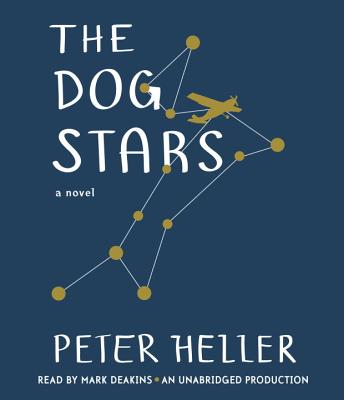 Nine years after a flu epidemic left only 1 percent of the world’s population alive, Hig is living in an airport hanger in Colorado with his dog, Jasper. Every day is a battle for physical and mental survival.

He desperately misses his wife and is filled with guilt and remorse over her death and that of their unborn child. Once in a while, when he’s hunting or fishing, he allows himself to pretend life hasn’t changed, but really, every move past the tarmac is a calculated and well-reconnoitered high-risk adventure.

Hig’s only neighbor is Bangley, a gun-loving, sharp-shooting loner who has become a sort-of ally. Together they have defended their territory, from wandering gangs and solitary enemies. Still, they haven’t exactly bonded.

Despite the security of the airport, Hig is drawn to a random radio signal he picked up three years earlier. He can’t help but wonder if pockets of civilization still exist or have been rebuilt. From the air, he has explored every inch of ground within his flying radius and has found no sign of settlements. What would happen if he flew until his fuel ran out?

Outdoor writer Peter Heller’s debut novel is a beautifully written character study of a man who mourns the past, has found a way to live in the present, and has not lost hope for the future. Heller’s experience as an outdoorsman brings a strong authenticity to The Dog Stars and Hig’s survival skills in a dystopian world. And his descriptions of the natural world among the devastation of humanity can be breathtaking.

The Dog Stars shines in three other ways. First is the humanness of Hig, whose complexity, spiritual/ethical dilemmas, and refusal to completely abandon hope make him easy to root for. Second is the realism of Hig’s dystopian world, the population of which was destroyed by influenza, a not impossible scenario. Finally, Heller’s literary, almost poet, style makes this bittersweet story unforgettable.

The unabridged audiobook edition (10.5 hours) of The Dog Stars is read by actor Mark Deakins, who does an impressive job of capturing the nuances of Hig’s internal dialogue. Through careful modulation of pacing, volume and tone, Deakins augments the realistic character of Hig’s thoughts, bringing the pilot’s personality to life. His emotional cues and sensitive narration perfectly complement Heller’s affecting prose, making The Dog Stars a winning audiobook.