A source has said the actress, worth a reported $125 million, has asked for a pre-nup, but not everyone is sold. 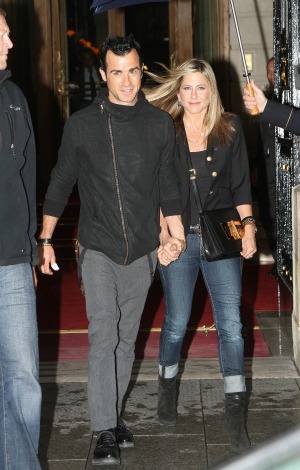 Multiple sources are reporting that Jennifer Aniston has asked for a prenuptial agreement from new fiance Justin Theroux. But, not so fast.

“Jen’s thrilled to be getting married but she’s leaving nothing to chance,” a source told the Daily Star. “She wants to make sure all her assets are protected, especially with her track record with men.”

Aniston is worth around $125 million, and the source told the paper she is refusing to marry Theroux until he signs the agreement.

“She wants to make sure all her assets are protected, especially with her track record with men,” said the source.

But Perez Hilton is not sold.

“Look, we’re not saying it won’t happen, or that it wouldn’t be smart to draft one up,” said Hilton. “But we HIGHLY doubt she’s jumping on the pre-nup ship already!”

The same source told The Daily Star that Aniston’s ex-husband Brad Pitt called her with congratulations on the news of the engagement.

“Brad gave Jen a quick call to say how pleased he was to hear that she was getting married,” said the Daily Star. ”He jokingly asked if he should ‘save the date,’ and they both laughed, but told her in all seriousness that he was really happy for her and Justin.”

Pitt himself is said to be getting married sometime soon. Rumor is that he and his fiancee Angelina Jolie would be married last weekend.

“Guests, including Brad’s parents, have arrived at the chateau ahead of the bash, to be held at Chateau Miraval this weekend,” said Lizzie Smith with the Daily Mail.

While the party was said to be for Pitt’s parents, many speculated it was actually a ruse for the couple’s wedding.

But there has been no news since last weekend from the small town in France.

Aniston and Theroux have not announced a wedding date or location.