After Paul West, author and wordsmith, suffered a stroke that left him literally speechless, his wife, Diane Ackerman, fought to help him regain his voice. Despite the frustrations and losses, Ackerman’s memoir of their redefined relationship is surprisingly uplifting. 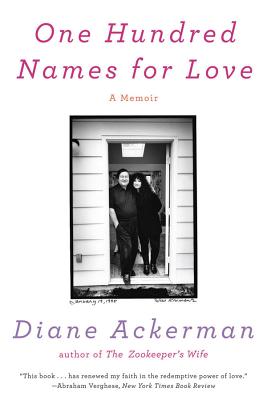 When Diane Ackerman met her future husband, Paul West, they were immediately drawn to each other’s command of language. Words, wordplay, writing, reading and observing were at the center of their lives and their relationship.

Thus in 2004 when, in the span of heartbeat, West was transformed from wordsmith to the speaker of one syllable (mem), it was especially devastating. Worse was knowing that although West had lost the ability to communicate through language, he had not lost the ability to think.

Alternating between stories of their earlier verbal life together and the evolving realities of their life post-stroke, Ackerman helps us understand the extent of her husband’s aphasia and continuing disabilities. She recalls the initial medical tests, numerous speech therapy sessions, and ever-more-gloomy prognoses until, finally, West spoke. The trouble then was how to decipher sentences such as, “Stir the nevis!”

In One Hundred Names for Love, Ackerman writes about what she did when traditional therapy failed her husband. Refusing to let West spend the rest of his life without verbal communication, she began using unconventional ways to help him find his voice.

One of the more interesting ways tapped into West’s creativity. Ackerman decided to experiment by encouraging him to tell her about his “head full” of thoughts, which she would then commit to paper. By asking him to describe what was happening to him instead of taking him through standard speech therapy exercises, Ackerman slowly opened the door to West’s inner turmoil, giving him a way to once again create through his writing. Although it “was a painstaking process,” West began to speak more each day, eventually even commenting on punctuation and structure.

As part of their private language, West used to make up pet names for Ackerman, which would evolve and morph into new words and phrases. Ackerman recalls:

Once we lived in a house made of words. Our personal vocabulary had ranged from the word flaff, which meant utter nonsense to mrok, a plaintive cry often uttered by one of us hoping to locate the other. Just as some couples mainly relate through their children, we had related through our rowdy family of words. We wallowed in codes and idiomatic privacies. (p. 169)

Drawing on that tradition, Ackerman began to ask West every day to give her a new name. These are the 100 names for love that make up the title of the memoir. They are listed in the text and include Golden Little Dreamer, Skylark of the Perfect Trance, and Inertia Canceled.

Ackerman ends her memoir with a dozen lessons she and West learned during the first five years after his stroke. Many will be welcomed by families that are looking for ways to jump-start a loved one’s recovery; others are lessons for all of us.

One Hundred Names for Love, now out in paperback, is the story of a special marriage that offers hope, advice and comfort to families seeking to move past life’s obstacles.