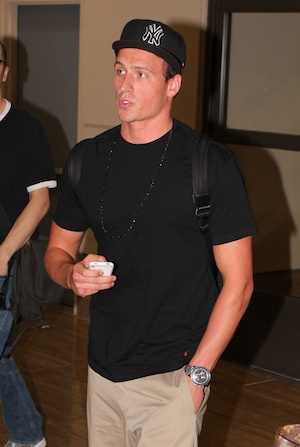 Swimmer Ryan Lochte appears to be a rising celebrity. Already admired as an elite athlete — recently showcased at the 2012 Summer Games — on Friday night Lochte makes his first appearance on The Tonight Show with Jay Leno. Unlike fellow U.S. Olympian Gabby Douglas, Lochte is clearly at ease in front of the cameras and audience. Dressed in a suit, he answers questions about his next career move in his trademark style.

Leno seems to think reality television is a likely start for Lochte and mentions the rumors that Ryan Lochte could be featured as the next star of ABC’s The Bachelor or Dancing with the Stars. Ryan admits he isn’t going to shy away from the spotlight and tells Leno: “If [ABC] asked me to do The Bachelor I definitely consider it but I would talk to my family first.”

Is Ryan Lochte the next Bachelor? >>

Lochte also thinks he would fit in just fine on Dancing with the Stars thanks to his “A” in a college-level dancing class. Fellow guest star Kristen Bell didn’t seem too impressed with Lochte. Bell chimes in, “Do you have any idea how much training it takes to be on Dancing with the Stars, Ryan?” Lochte laughs her off as he casually replies, “Do you know how much training it takes to swim?”

In an earlier interview last week with Matt Lauer on The Today Show, Lochte wasn’t shy about voicing his eagerness for fame. “I definitely want to move to L.A.,” said Lochte to Lauer. “I’m looking forward to Dancing with the Stars or The Bachelor.” One thing is for sure, Ryan Lochte is certainly putting his name out there for Hollywood.

You can check out the preview of Lochte on The Tonight Show with Jay Leno below.