Taylor Swift shines in her new perfume ad for Wonderstruck Enchanted. The 22-year-old entertainment superstar explains her love for the dramatic campaign. 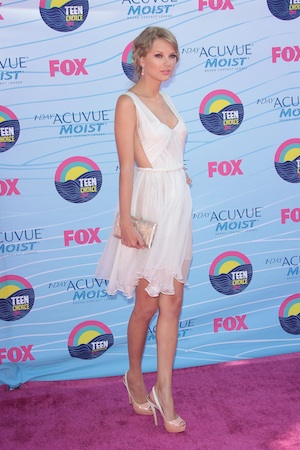 Taylor Swift looks like a modern-day princess in her new ad campaign for her latest celebrity fragrance, Wonderstruck. The bold and beautiful red gown — designed by Monique Lhuillier — compliments the sensual allure of Wonderstruck perfectly. People magazine reports the fragrance “has a blend of wild berries and flowers, with notes of passion fruit, white musk, and vanilla.”

Swift shot the ad campaign at the Magnolia Plantation in New Orleans, Louisiana. It is her second campaign for the Wonderstruck fragrance. Taylor created the concept for the campaign and she worked with KraftWorks, NYC, and Elizabeth Arden to bring her creative vision to life. The set was transformed into an enchanting sanctuary — with lush ferns and crimson sofas.

Taylor Swift buys home next to the Kennedys >>

Taylor Swift gushed to People magazine about the new Wonderstruck campaign. “I love the look of my ad,” she said. “I’m wearing this amazing gown that I loved as soon as I put it on. It’s a classic look, and that’s been my recent style obsession. Anything classic and timeless.”

Wonderstruck is set to debut at Macy’s in September and will retail for $50 to $60 along with a corresponding body lotion for $30.

Swift says her Wonderstruck fragrance symbolizes the romantic sparks that fly between two people who just meet and are instantly attracted to each other. She tells People, “Wonderstruck Enchanted is the next chapter in the story of my Wonderstruck fragrance,” she explains. “Wonderstruck is about that moment when you instantly feel a connection to someone, but then there’s that feeling of being completely enamored — enchanted — when you know a little more about that someone and still feel a strong connection.”

You can even score a free sample of Wonderstruck Enchanted at Taylor Swift’s Facebook page.