The First Couple celebrate a milestone this year, and a new plaque in their hometown of Chicago reminds them of their first date back in 1989. 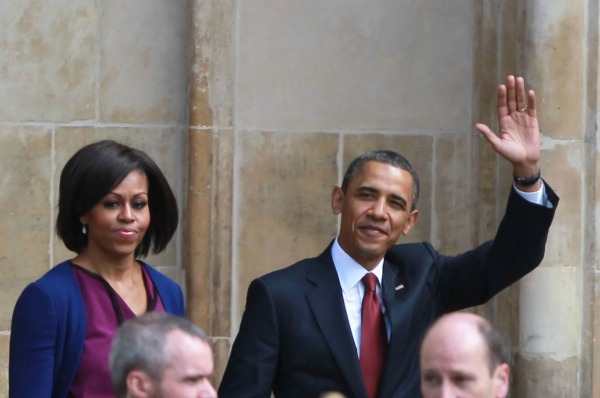 Chicago now has a new presidential landmark, albeit an unofficial one.

“The owners of a Hyde Park shopping center installed the 3,000-pound granite marker this week with a plaque,” said the Associated Press.

A lot of Chicago is undoubtedly proud of their president, and the plaque shows how the couple started.

“The sweet smooch happened in 1989 when the president treated the first lady to ice cream at a Baskin-Robbins, which is now a Subway restaurant,” said the AP. “The boulder sits in a flower bed next to the shopping center.”

The new plaque is located at a shopping center on Dorchester Avenue and 53rd Street.

The couple met while she was working at a Chicago law firm. President Obama was then a Harvard Law student who got a job at the same firm as a summer associate.

The plaque also includes a photo of the couple and a quote from President Obama describing the date.

“On our first date, I treated her to the finest ice cream Baskin-Robbins had to offer, our dinner table doubling as the curb,” read the quote. “I kissed her, and it tasted like chocolate.”

According to the Chicago Tribune, the quote came from an interview the president gave in 2007 for O, The Oprah Magazine.

“It’s a marker for the community, for posterity and tourism, too,” Jonelle Kearney, a spokeswoman for Mid-America Asset Management, which manages the shopping center, told the Chicago Tribune.

Fifteen-year-old Justen Jackson seemed to miss the point and was not impressed by the date.

“It’s nice, but I wouldn’t bring anyone here on a first date,” Justen told the Chicago Tribune. “They’re going to want to go somewhere better than Subway or Baskin-Robbins.”

The first couple still has a home in Chicago. According to the AP, it’s not far from the plaque. The Obamas will celebrate their 20th anniversary this October.