Ashley Tisdale is the new face of Project Pink — a campaign launched by PUMA to raise money for breast cancer. 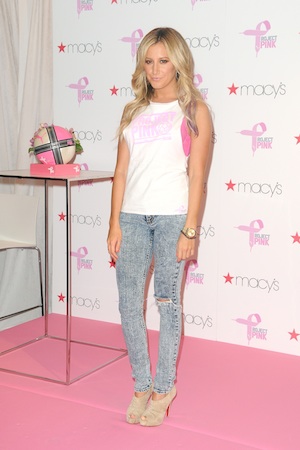 Ashley Tisdale teams up with PUMA for Project Pink. The actress is featured in a new public service announcement (PSA) sponsored by PUMA to help raise awareness of breast cancer. The video features Ashley with her grandmother — a breast cancer survivor — and shows off the new PUMA merchandise for Project Pink.

The Project Pink collection features PUMA casual apparel for women such as tanks tops and T-shirts, as well as athletic merchandise like soccer cleats and workout gear. Project Pink is targeted to female soccer players, and PUMA says all profits from the sale of Project Pink merchandise are donated to charity. PUMA fans actually get in on the action too: PUMA says it will send the profits to the charity customers vote for as needing the proceeds the most.

PUMA explains, “Everyone knows someone who’s been affected by breast cancer. You can make a difference by nominating your favorite charity for the Project Pink 2012 contest. The winning charity receives 100% of the profits from the sale of PUMA Project Pink gear, as well as $1 for every time someone tweets the hashtag #projectpink. All in all, the donation could be worth as much as $120,000!”

Ashely Tisdale stars as the face of PUMA’s Project Pink and narrates the PSA. You can check out the full PSA for Project Pink below: