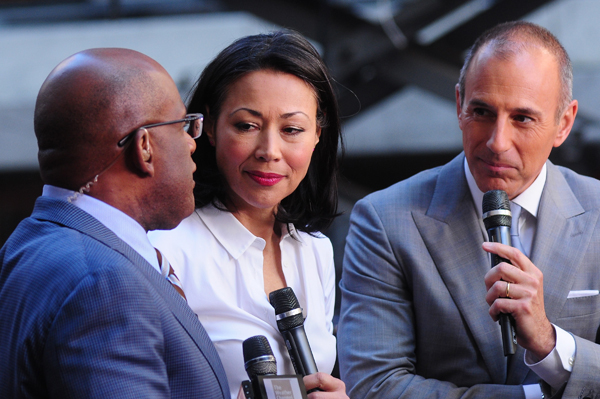 We’ve always wondered how Today show co-hosts feel about the whole bruhaha between Matt Lauer and Ann Curry. Now we know: It seems like weatherman Al Roker is definitely on Curry’s side, judging from some comments he made during Thursday morning’s show.

It all started during an interview of the U.S. Olympic women’s rowing team. The ladies were discussing the tradition of throwing one team member in the water after a victory when Lauer made a tongue-in-cheek comparison to New York City.

“The tradition here in New York is you throw her in the Hudson River,” Lauer joked. Roker then weighed in with a quip of his own.

“Which is different in our tradition, which is to throw one of us under the bus. That’s another story,” the jolly weatherman replied, referring to a comment that Lauer “threw [Curry] under the bus” in deciding whether or not to fire her from the show.

Roker’s words prompted a few moments of awkwardness, with co-host Savannah Guthrie and Lauer chiding him with “Mr. Roker!”

Could he just be joking about the whole situation, or is he really on Curry’s side about the whole thing? It seems like the latter, judging from the tense response of the team.

The 50-year-old newswoman has not minced words since being dismissed from the show in July. She might have kept a cushy job with NBC, but she’s obviously bitter about the way her firing went down. Basically, she thinks she was set up to fail and could never do anything right when it came to her appearance.

“One day I wore a multicolored dress [on Today] and someone asked if I was trying to be Toucan Sam,” she told Ladies Home Journal. “But I chose it because I thought, ‘This will perk up America.’ I’m encouraged by my bosses to wear these ridiculously high-heel shoes because women say, ‘I love your shoes!’ So if it makes women happy, I’ll wear them. But I’m still going to be me.”

Curry again appeared with Lauer during an Olympics segment — and the tension was thick. They were cordial on camera, but “when the cameras stopped rolling, Ann wouldn’t even look at Matt,” a source told US Weekly.

Do you think Al Roker’s joke means he’s on Ann Curry’s side?