Like Somali artist K’Naan before them, Silversun Pickups is going after the Romney camp — sending a cease and desist letter to the GOP frontrunner’s campaign to stop using their song, “Panic Switch,” as it travels the country drumming up support. 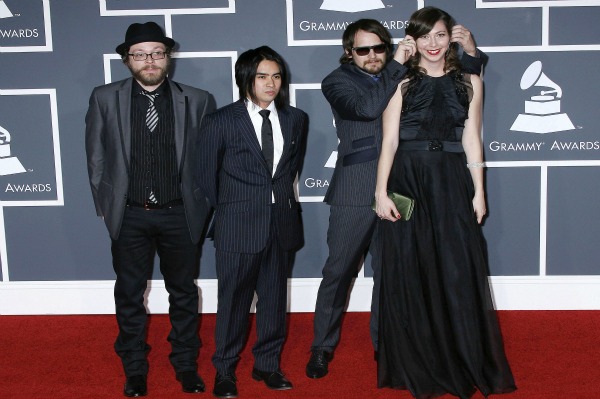 Silversun Pickups got its attorney involved after catching wind on Twitter that the alt-rock group’s song, “Panic Switch,” was played during Mitt Romney’s stop in North Carolina.

“We don’t like people going behind our backs, using our music without asking, and we don’t like the Romney campaign,” Lead singer Brian Aubert said in the statement, by way of the Associated Press. “We’re nice, approachable people. We won’t bite. Unless you’re Mitt Romney!”

“We were very close to just letting this go because the irony was too good. While he is inadvertently playing a song that describes his whole campaign, we doubt that ‘Panic Switch’ really sends the message he intends,” the musician continues.

No joke, Aubert. “Panic Switch” addresses the “red views” that “keep ripping the divide.” A career politician like Romney, who is so often criticized for his lack of authenticity and backbone, probably wants to shed lyrics like the following: “Could I be anything you want me to be. It’s always meant to be seen.”

Then there’s the reference to “pink slip” — not exactly a characteristic we’d think Bain Capital’s golden boy would want to promote, considering claims that he’s “no mercy” when it comes to widespread layoffs.

In response to the cease and desist letter received from the L.A.-based band’s attorney, the Romney camp contends “Panic Switch” was played by accident — as the campaign was setting up for an event.

“That said, it was covered under the campaign’s regular blanket license, but we will not play it again,” a spokesperson said.

According to the AP, the campaign has licensing agreements with BMI and ASCAP, which apparently means it was protected from legal action for using the song; however, the band’s publicist says otherwise — that the song’s use wasn’t covered.

This isn’t the first time a musician has gone after the Romney campaign for using a song.

“I have not been asked for permission by Mitt Romney’s campaign for the use of my song. If I had been asked, I would certainly not have granted it,” K’Naan said in a statement published by CNN in February. “I would happily grant the Obama campaign use of my song without prejudice.”

The AP takes an even bigger step back in time, reminding us of the controversy surrounding the Reagan campaign’s use of Springsteen’s “Born in the USA” and, more recently, Michelle Bachmann’s face-off with Tom Petty for using his “American Girl” during her bid.

Aside from that whole “the GOP is destroying itself, thanks to its warring factions,” the party has another problem on its hands: the Dems have all the good music! (insert winking emoticon here).