Following the remastering of Jaws, the movie that invented the summer blockbuster, the mom who gave Chief Brody a generous slap is done repeating the action that made her famous 37 years ago.

Actress Lee Fierro played Mrs. Kintner, the mother of a boy who is eaten alive by a great white shark as the townspeople, and most notably the sherriff, Chief Brody, played by Roy Scheider, look on in the blockbuster hit Jaws.

The death of the Kintner boy is one of the harrowing moments of the film, the first time — other than the opening credits — that the townspeople are confronted with the danger of a man-eating shark. This is just one of the scenes that kept fans on the edge of their seats in the summer of 1975 when the film first hit the theaters.

A panic on the Fourth of July…

In this exclusive clip brought to you by SheKnows, an interview with Fierro explains how one moment on the big screen changed her life forever. “How many times have I been asked to slap somebody…? I’ve never counted,” the actress says. “It happens a lot, and it is mostly young men.” 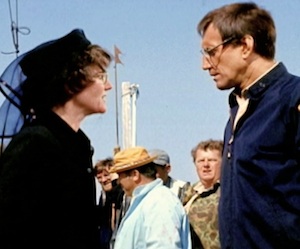 And so, up until recently, Fierro indulged these requests. Slapping man after man after man. She was coerced, pleaded with and often times begged to slap fans across the face on queue just like she did in Jaws. “I do it to please the fans, but last year,” she says. “I decided, that is it. I have slapped my last slap.”

Despite the frustrations Steven Spielberg had with shooting his first big studio film as a young director (the mechanical shark never worked properly, shooting on location was difficult), the film became an overnight phenomenon. It became the highest-grossing movie of all time when it was released.

The story is about an ex-New York City cop who moves to a small island off the coast of New England in hopes of living a more quiet life. But when a great white shark starts to terrorize the waters around his island, this land lover has to take to the ocean and confront the killer himself. The film is considered a classic among movie buffs and fans alike report fears of open water after just seeing the film once. 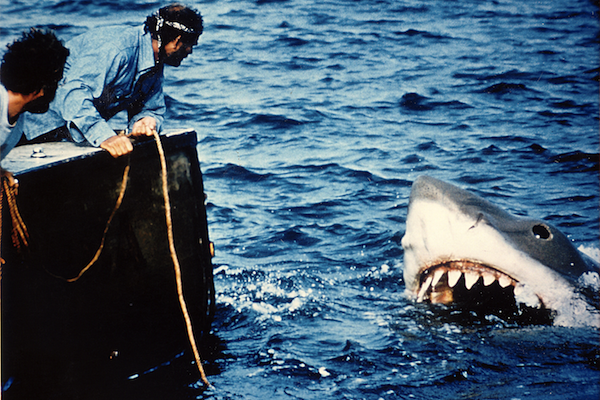 Fierro still lives on Martha’s Vineyard, Massachusetts, the shooting location for Jaws. She says as of now, she’s done slapping. Wonder if she’ll make an exception if asked just the right way…? Anyone down for a trip to the Cape?

Jaws has been digitally remastered and is now available on Blu-ray, which features never-before-seen interviews and clips from one of the scariest shark movies of all time. This clip comes from a new documentary The Shark is Still Working: The Impact and Legacy of Jaws, which is also available on the Blu-ray edition.