Unlike Kim Kardashian, Ali Lohan, Bristol Palin and countless others under the Hollywood light who deny going under the knife, Trista Sutter was more than happy to talk about how she got her new bod, thanks to a doctor in Houston. 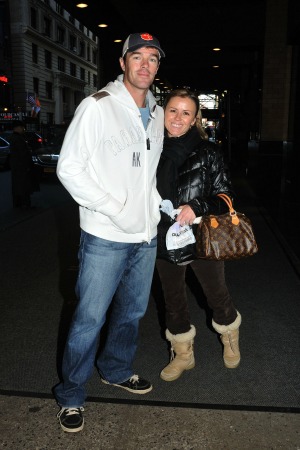 TV’s first Bachelorette, Trista Sutter, turns 40 in October (can you believe it?). With that milestone approaching, Sutter told Life & Style she decided to go under the knife “to feel pretty again.”

“After nursing both my kids for a year each, my boobs were deflated,” said the mother of two.

No problem! A doctor in Houston delivered on a breast augmentation and internal lift, increasing her cup size from a small B to a full C, according to the mag.

While she was at it, the reality TV star also had an eye lift and the doc removed bags from under her peepers.

The droopy eye, Trista said, “was something that I noticed in every picture I’ve ever taken.”

Is The Bachelorette racist? >>

Instead of denying an obvious change, or pretending like she’s somehow discovered the “fountain of youth” (like other celebs), Trista is embracing all aspects of her new look, including how she got it.

“I realized that the surgery was something I had to do for myself, just for my own self-confidence and to feel good again about being in bathing suits and being intimate with my husband,” Trista said, referring to husband, Ryan, who she met on the show in 2003. “He wanted me to be happy, so he said, ‘Whatever you need to do to make yourself happy, go for it.’

The mere fact that those two are still together again after meeting on, of all places, The Bachelorette, is enough cause for celebration!