Megadeth lead singer Dave Mustaine doesn’t like President Obama. How deep does his hatred of the POTUS run? Pretty deep, it seems. 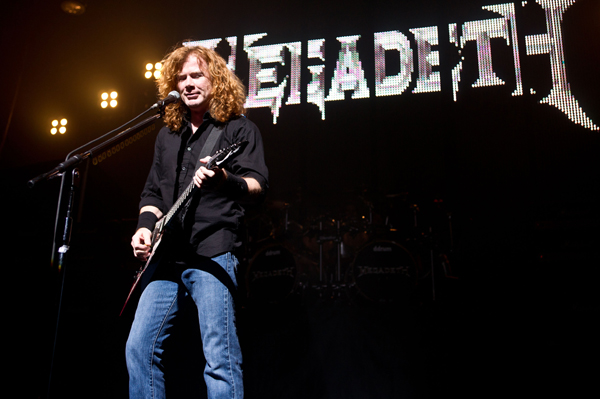 “Back in my country, my president is trying to pass a gun ban, so he’s staging all of these murders,” Mustaine told the crowd during a Wednesday concert in Singapore.

“Like the ‘Fast And Furious’ thing down at the border and Aurora, Colorado, all the people that were killed there and now the beautiful people at the Sikh temple.”

The formerly liberal musician apparently has quite the bone to pick with Obama — he’s publicly come forward as a Birther, meaning he doesn’t think the president was born in the United States.

“Why hasn’t somebody moved to impeach this man?” Mustaine mused to controversial radio host Alex Jones “With all of the proof about his birth certificate being fake. And you see the signs in Kenya that say ‘the birthplace of Barack Obama.’ Hello?! C’mon, guys. How stupid are we right now?”

Mustaine came out earlier this year in support of former GOP presidential hopeful Rick Santorum. We’re going to go out on a (short) limb and assume he’s also in support of Mitt Romney as president.

“I’m just hoping that whatever is in the White House next year is a Republican,” Mustaine told MusicRadar.com earlier this year. “I can’t bear to watch what’s happened to our great country. Everybody’s got their head in the sand. Everybody in the industry is like, ‘Oh, Obama’s doing such a great job…’ I don’t think so. Not from what I see.”

“I’m very looking forward to a Republican being back in office,” Jameson told CBS San Francisco earlier this month. “When you’re rich, you want a Republican in office.”