Wayne Brady is quickly losing his reputation as the king of nice comedy, judging from a joke he made at Roseanne Barr’s roast. His new personality is understandably upsetting some parents. 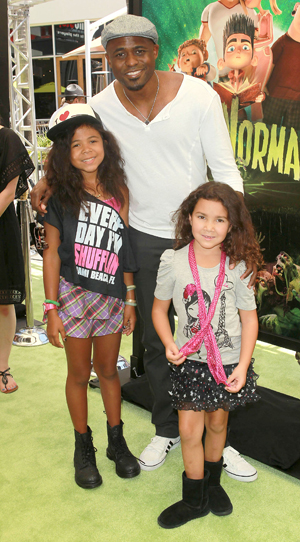 Wayne Brady is known for his family friendly jokes and personality. But, if he’s consciously trying to get away from that reputation, it’s working. First, the comedian went on an expletive-filled rant against Bill Maher a few weeks ago — and now he’s making jokes about people with disabilities.

The joke in question came courtesy of Brady’s portion of the Comedy Central roast of Roseanne Barr.

“Now the thing is, Jeff, these are all jokes, and I really like you. I really, really like you,” he said, referring to roastmaster Jeffrey Ross. “But a lot of people hate you, especially Sarah Palin because you remind her of what Trig is going to look like when he’s 40.”

Basically, he’s saying that Ross looks like he has Down syndrome. Pretty hilarious, eh? Yeah, no — and the parents of children with the genetic condition aren’t too pleased, either. One father, Rick Smith, wrote an open letter to Brady on his blog, Noah’s Dad.

“Your remarks about Trig Palin during Comedy Central’s roast of Roseanne Barr were out of line, hurtful, and disrespectful not simply to the Palin family, but to thousands of individuals living with Down syndrome today, their families, friends, and all of us who place a high value on all human life,” Smith wrote.

“…It breaks my heart that someone could say things to purposely hurt my little boy. Perhaps what hurts the most is that while I’m expecting these sorts of comments from children too immature to understand the gravity of their words, I don’t expect them from adults,” he added, going on to say that his son is a fan of Sesame Street — a children’s show where Brady frequently makes guest appearances.

“Were you aware that Sesame Street features children with Down syndrome on their show from time to time? I’m curious if you have ever met any children with Down syndrome while on their set?” he asked. “…if I see you on an episode of Sesame Street after these comments, I would turn the channel. I would not want to watch you on that show pretending to be a person who loves and cares for all children.”

Smith makes several great points in his letter. It got us thinking: How can we expect children to not to bully each other when adults like Brady — and 50 Cent with his autism comment — say these things? Well, we can’t.

What do you think: Is Noah’s Dad right, or are people taking Wayne Brady’s Down syndrome joke too seriously?