Sofia Vergara is engaged and proud! How proud? Very, judging from her wide smile and huge, huge engagement ring. 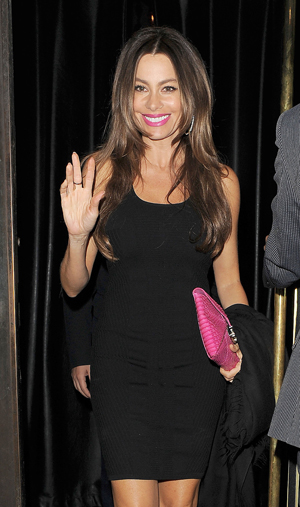 If there was any doubt that Modern Family Star Sofia Vergara is engaged, it’s gone now. The 40-year-old actress showed off her huge rock — seen here — from on-again, off-again boyfriend Nick Loeb while out and about in Los Angeles earlier this week.

Loeb proposed to Vergara during her birthday celebration in Mexico in July. The actress’ son, Manolo, and a few of her ABC co-stars were there to help her ring in a new decade and a new life as an engaged woman.

One of the co-stars on the trip — Sarah Hyland — told US Weekly that the proposal was a shock for everyone.

“It was crazy because there were actually two tours of the ruins and I was on the English tour and Sofia was on the Spanish tour, so I didn’t really know until we all met back up together,” Hyland recalled.

Loeb proposed on top of some Mayan ruins in Chichen Itza. “It was a very exciting time, her whole family was there so it was fun.”

Manolo even caught the whole thing on tape for his YouTube mockumentary, Mi Vida Con Toty. He never comments on the actual engagement, just that the tour of the Mayan pyramid was one of his mom’s dreams.

“Then one of my mom’s dreams came true. As a little girl, she always wanted to go to the top of the pyramids. Unfortunately, people are not allowed to do that anymore. But since it was her birthday, her team worked for months on end to get her special permission to go up!” the 20-year-old aspiring filmmaker said.

Sofia Vergara is the hottest woman ever, men say >>

Vergara has never directly said she’s engaged, but Hyland pretty much confirmed it when she revealed what she’s getting her co-stars as a wedding gift.

“I’m probably (getting her) something kinky!” she joked.

What do you think of Sofia Vergara’s huge engagement ring?