Rihanna sat down with Oprah to talk about her life — so of course the subject turned to her violent ex Chris Brown. What did the star have to say about the man who abused her? 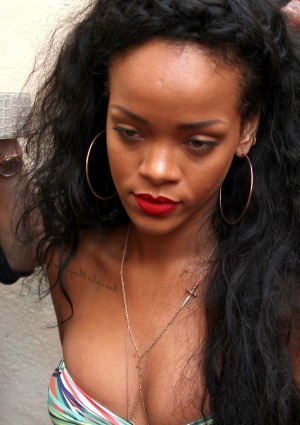 If you were hoping Rihanna would finally turn on Chris Brown and call him out for violently attacking her the night before the Grammys over three years ago, you’ll be disappointed.

The singer sat down with Oprah in her luxe Barbados hotel and talked about that fateful night, calling Brown her BFF and saying she felt “protective” of him even after he repeatedly slammed her head into a car window.

“I lost my best friend,” Rihanna told Oprah. “Like everything I knew was switched. Switched in a night. And I couldn’t control that. So I had to deal with that, and that’s not easy for me to understand or interpret. And it’s not easy to interpret on camera, not with the world watching.”

“So it’s hard for me to even pay attention to my mind and figuring things out because it now became a circus.”

“I felt protective,” she continued. “I felt like the only person they hate right now is him. It was a weird confusing space to be in because to be as angry — as angry and as hurt and betrayed — I just felt like he made that mistake because he needed help, and who’s gonna help him? Nobody’s gonna say he needs help. Everybody’s gonna say he’s a monster without looking at the source. I was more concerned about him.”

She may still feel the same way. The two singers reportedly have seen each other with some frequency in recent months, with both attending the same clubs and parties.

See what else Rihanna has to say about Chris Brown on Oprah’s Next Chapter, airing Sunday, Aug. 19, at 9 p.m. Eastern/8 p.m. Central.