Anna Kendrick dishes to SheKnows about the snarky teenager she plays in the new kids zombie flick ParaNorman.

“It was so great to have a character who is so unpredictable and maybe borderline insane,” says Anna Kendrick, who plays the voice of Courtney Babcock in the new zombie kids flick ParaNorman. The stop-motion animation film is about an 11-year-old boy, Norman, who can see and talk to ghosts. His big sister, Courtney, thinks that’s the craziest thing she’s ever heard. 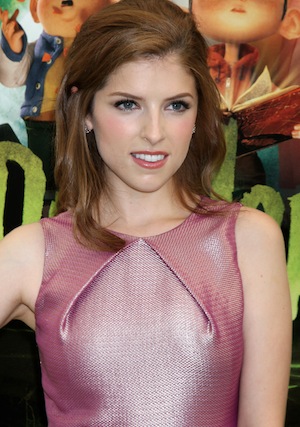 “It was such a treat to play somebody with violent mood swings,” Kendrick says of playing an older sister who is the snarkiest person in the film, even a bit angrier than the zombies themselves.

But the big question remains was Kendrick like that when she was a teenager? The 27-year-old actress from Maine grew up with an older brother, actor Michael Cooke Kendrick. So, did she annoy him more than he annoyed her?

“There was a period where he was a teenager, and I was probably just a little younger and I just copied everything he did. If it was his favorite movie, it was my favorite movie…. I must have been really annoying about it,” she says of her relationship with her brother.

So, what would she have done if her older bro told her he could speak to ghosts? “When I was younger, I probably would have been like, ‘That is amazing, that is so cool.’ If he said it now, I’d be seriously concerned. When I was a kid I would have thought that was amazing,” she says.

When we asked her to try her favorite Courtney line from the film, Kendrick clammed up. She flat-out refused to go into the snippy character she plays on screen. But why can’t she perform this character on cue?

“I can’t really do Courtney because it’s embarrassing. I make a lot of weird faces,” she says. Looks like you’ll have to see the film to hear the snark. ParaNorman creeps into theaters Aug. 17.