SheKnows caught up with Leslie Mann who voices the mom character in the new zombie kids flick ParaNorman. Just how close is the parenting style of this loveable animation to the real-life mom…? Leslie Mann tells all.

Being a parent isn’t easy, on or off screen. In the new zombie kids flick, ParaNorman, actress Leslie Mann performs the voice of Sandra Babcock, the mom of an 11-year-old boy who can see and hear ghosts. “It’s so hard,” the 40-year-old actress and mother of two says of parenting. She only hopes to be as thoughtful and caring as the character she plays on screen. 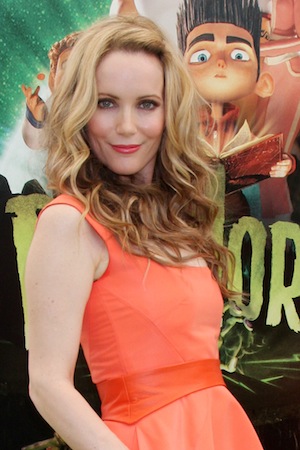 “The real life version of that is you can be a calm, sweet voice, but sometimes life gets hard and it gets stressful and you can’t be that voice and then someone else steps in and it’s kind of like moving pieces all the time,” Mann says.

ParaNorman is the new 3D stop-motion animation film from the makers of Coraline. When the creepy New England town of Blithe Hollow receives a group of visitors in the form of 300-year-old zombies, little Norman is the only one who can help save the day.

Mann plays Norman’s mother and one of the only characters in the film who has any sympathy for his condition. “My character in this movie is really nice, maybe I’m not as nice,” Mann admits, although laughing while she does it.

A mom’s role is to listen

So, how does the star of the upcoming mid-life crisis movie This Is 40 react when her own kids come to her with problems? “With having a 14-year-old and a nine-year-old girl… they really struggle, and especially my 14-year-old who has a lot of hormones and craziness happening right now. I really need to be there for her, and she mainly needs to vent. She needs me to listen,” she says. Mann is married to director Judd Apatow (Knocked Up, The 40-Year-Old Virgin).

“They just want to get it all out, and then they feel better. You can offer them advice, they usually don’t hear it. You can try… I heard somewhere that you have to say things thousands of times before it sinks in to your kids.”

We hope Norman doesn’t need that much encouragement before he saves his town from zombies! Actor Kodi Smit-McPhee (Nightmares and Dreamscapes: From the Stories of Stephen King, Romulus, My Father) voices the role of Norman, and Anna Kendrick, Casey Affleck and John Goodman co-star in ParaNorman, which creeps into theaters Aug. 17.