We know this much — Taylor Swift has stayed true to her word: “If you break my heart or hurt my feelings, I’m gonna write a song about you.” But the inspiration for her new song, “We Are Never Ever Getting Back Together,” remains a mystery — at least until now, thanks to Joe Jonas stepping up and saying, “Wasn’t me!” 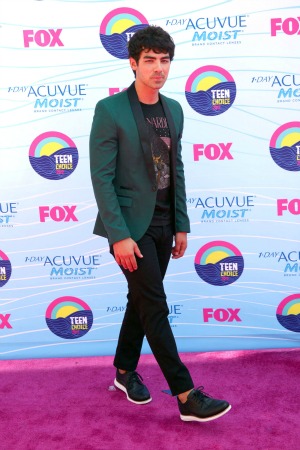 Wednesday morning, Joe Jonas told D.C.-based The Tommy Show that, contrary to the rumors, Taylor Swift’s new song — “We Are Never Ever Getting Back Together” — can’t possibly be about him.

And the singer says the reason he’s not the inspiration for sweet little Taylor’s musical wrath is obvious: “It’s not about me, because I don’t think we’ve ever tried another time.”

After chuckling with the radio show’s host, Jonas swiftly added: “I like the song. Taylor does pop music really well, and I’m happy for her.”

In fact, when asked about whether he keeps in touch with his famous ex, he said he was able to go to a “phenomenal” live show of hers last year.

Doesn’t exactly sound like the type of rocky relationship that would bring out an angsty Taylor, does it?

Joe also reminds us that the relationship is “years removed;” the pair reportedly dated for less than six months in 2008.

We’re going to take Joe’s word for it. Look, the song is about one of those annoying relationships where vows are made to end it all but the couple keeps finding each other. Over and over again.

So who can it be this time around?

While the singer has dated Twilight’s Taylor Lautner as well as actor Jake Gyllenhaal, there seems to be only one other contender left (after ruling out Joe): John Mayer.

Yes! It appears Taylor Swift wrote yet another song about the increasingly shaggy looking musician.

After all, Starpulse isolates one lyric in particular that seems to indicate “case closed:” “Hide away and find your peace of mind, with some indie record that’s much cooler than mine.”

Unless Taylor’s referring to her ex simply listening to an indie record, in all likelihood she’s singing about another musical artist. With Joe out of the picture (and not exactly “indie”) that only leaves John Mayer.

For some reason, Mayer is a heartthrob, and has currently been seen out and about with Katy Perry.

Apparently, at least in Taylor’s eyes, Mayer’s also a first-rate a**hole. Because it looks like we can now add “We Are Never…” to the collection of Mayer-hating songs — alongside her ode to the scruffy artist, “Dear John.”