Jon Stewart’s a comic so, naturally, he kept things light and cheery during a sit-down with Robert Pattinson. Two days later, during Wednesday’s Good Morning America, it’s a different story, as George Stephanopoulos confronts the actor about the bomb K-Stew dropped. 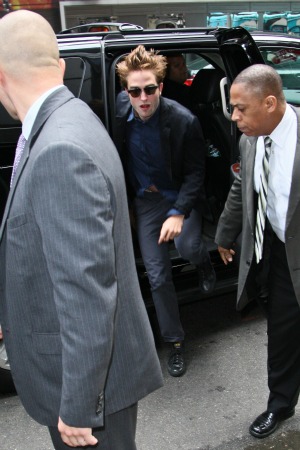 We can’t exactly call it a “good morning” for Robert Pattinson, as George Stephanopoulos attempts to get “the elephant out of the way” — with the elephant being girlfriend Kristen Stewart’s affair with a married director — on Wednesday’s Good Morning America.

It started off nice enough, though.

The GMA host hands Pattinson a box of Cinnamon Toast Crunch, paying homage to Jon Stewart’s offering of another comfort food — ice cream — during Pattinson’s appearance on The Daily Show earlier in the week.

Then Stephanopoulos puts on his ex-political adviser and This Week hat and asks the hard-hitting question — what everyone wants to know anyway: How is his “personal life” following K-Stew’s “indiscretion”?

Pattinson still wanted to speak more to the box of sweet cinnamon goodness — the actor’s “gift” for making a stop on GMA to promote his upcoming flick, Cosmopolis.

“I mean, you know they seem pretty excited about whatever,” the Brit said, referring to the throngs of fans who turned out for his GMA appearance. “I’d like my fans to know that Cinnamon Toast Crunch only has 30 calories a bowl in it.”

It was obvious that Pattinson didn’t want to talk about “it.” But it’s just really hard to move that big ol’ elephant by yourself.

He eventually elaborated by saying, of his life under the spotlight: “It’s a different thing. You go into it to do movies.

“I’ve never been interested in trying to sell my personal life and that’s really the only reason people bring it up. The reason why you go on TV is to promote movies. That’s the only way to do it.”

Pattinson also likened being under the microscope to being on a “the craziest theme park ride you’ve ever been on.”

“It’s totally exciting but eventually at some point you have to have a break,” he continued.

Eventually, the conversation turned to the reason the actor was on GMA (allegedly) in the first place: Cosmopolis.

Set to open in limited release this weekend, Pattinson plays an asset manager who is already a billionaire at age 28 and, according to IMDb, while his day starts off innocently enough (he just wants a haircut!) it “devolves into an odyssey with a cast of characters that start to tear his world apart.”

We know of one person who has at least put the real-life Pattinson’s world into a tailspin. For starters, Pattinson has to sidestep questions about “the affair” during a whirlwind promotional tour.