Just as VH1’s already-shot series featuring the now-divorcing Chad “Ochocinco” Johnson and Evelyn Lozada, had to be canned, HBO no doubt saw some ratings sparks as it televised the awkward (and much-anticipated) moment when Johnson was cut from the Miami Dolphins. 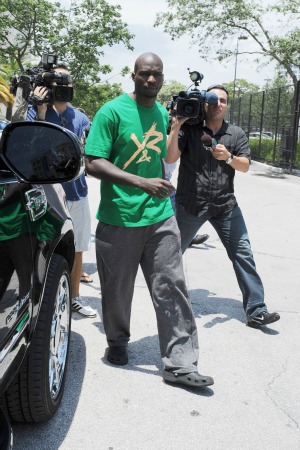 Three days after Chad “Ochocinco” Johnson was arrested after allegedly “head-butting” his wife, reality television star Evelyn Lozada, the ex-NFL star was axed by his coach in front of (potentially) millions of viewers during an episode of Hard Knocks.

In a happy coincidence (for HBO), the series, which documents NFL teams, shadowed Johnson’s former team, the Miami Dolphins, this season.

Before Coach Joe Philbin called Johnson into his office, it was pretty obvious he knew what was coming. And, judging from footage shot even before his Saturday arrest, the Dolphins would have axed the over-the-top athlete anyway — thanks to his performance on the field.

“I let you down a little bit — a lot,” Johnson told Philbin during the show, eventually saying, “I apologize for embarrassing you and this organization.”

A lot of back and forth follows, with Philbin saying (referring to his alleged head-butting of his soon-to-be ex-wife), “It’s not really just (about) last night — it’s about where we are as a program and where we’re headed.

Before Philbin gives him the final heave-ho, Johnson tells a fib in what appears to be a desperate attempt to keep his job.

“Coach, I’ve never been in trouble before — ever,” he said, sounding far-younger than his 30-some years.

Of course, as TMZ points out, Johnson has been in trouble before.

In fact, by way of the gossip site, he was arrested and did community service related to another domestic abuse charge in 2000.

Philbin probably wanted to roll his eyes many times, if not for the cameras rolling.

The episode closes with Coach saying the generic “it’s best for both of us that we … part ways at this point in time,” shaking hands and then a cut-away to Johnson’s locker getting cleared out.

The public firing is just the latest in a series of “hard knocks” for the outrageous wide receiver.

Johnson was also canned by VH1, which dropped the (already-shot) series featuring the couple — Ev and Ocho.

News also broke Tuesday that Lozada had filed to divorce Johnson — after just more than 40 days of marriage.