Anderson Cooper and Andy Cohen sitting in a tree… Could it be? Maybe! The pair is currently vacationing in Croatia together. 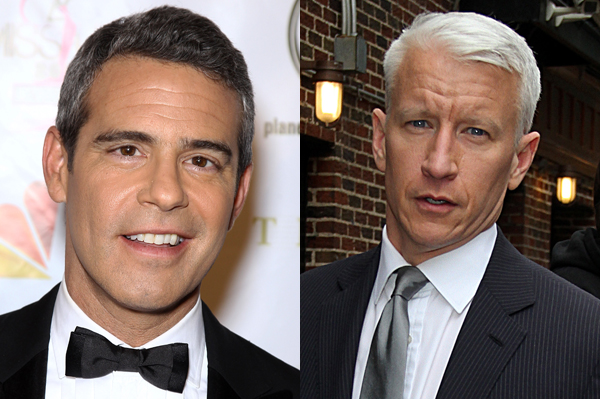 Now we understand why we haven’t seen Anderson Cooper looking sad over the photos of his longtime boyfriend, Ben Maisani, kissing another dude: He’s in Croatia.

But, he’s not in Croatia alone. Oh, no: Bravo chief drama instigator Andy Cohen is there too, thanks to some matching photos they posted on their respective Instagram accounts.

“Look who just took the same instagram pic as me @bravoandy,” Cooper tweeted, posting a photo of the adorable Cohen.

We approve of this pairing. Apparently, there have been rumors of romance between the two for years. The National Enquirer even did a story on the two in 2011, saying that Cohen has a “man crush on [Cooper] — and pals say he’s gunning to snatch the news hunk away from his boyfriend.”

The Enquirer has a knack for getting these things right (the John Edwards fiasco, for one) so we’re willing to bet they’re right about this, too.

We’re happy to see a different side of Cooper since he came out of the closet in July.

“The fact is, I’m gay, always have been, always will be, and I couldn’t be any more happy, comfortable with myself and proud,” he wrote to The Daily Beast’s Andrew Sullivan. “It’s become clear to me that by remaining silent on certain aspects of my personal life for so long, I have given some the mistaken impression that I am trying to hide something — something that makes me uncomfortable, ashamed or even afraid. This is distressing because it is simply not true.”

Now he’s out and proud — and we couldn’t be happier for him. We’re just waiting for the Andy/Andy wedding. Just make sure Kathy Griffin officiates the ceremony.