The singer has never been shy about singing about her ex-boyfriends. This time is no different, but we are all left guessing who “We Are Never Ever Getting Back Together” is about. 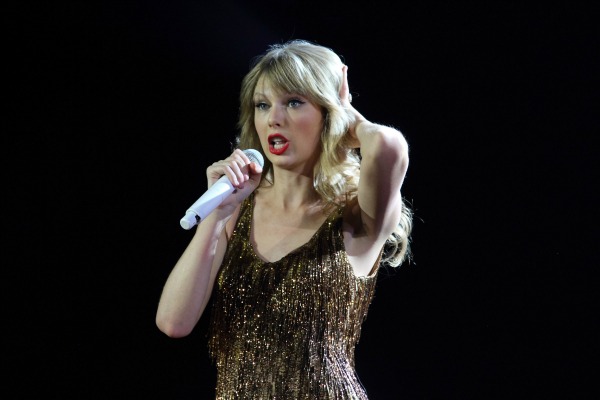 Taylor Swift is known for including her real life in her songs, including love, like and break-ups.

The title of her new song is enough to make any Swift fan or follower curious who it might have been written about. “We Are Never Ever Getting Back Together” was first played for her fans during a web chat Monday night.

“So this is the new single. It’s a really romantic song,” she said sarcastically during the chat. “It’s really touching and sensitive, for my lovely ex-boyfriend.”

The song appears to be speaking about a specific experience in Swift’s life.

“When you come around again and say / Baby, I miss you and I swear I’m gonna change,” said the lyrics. “Trust me, remember how that lasted for a day / I say, I hate you, we break up, you call me, I love you.”

So let’s see. There was John Mayer, who Swift had a bad breakup with. But she already wrote a song about him.

She also dated Joe Jonas, but that was four years ago and she also wrote a song about him. Sort of.

In 2009, Swift hosted Saturday Night Live, and wrote a song as her monologue. She started the song talking about her songs and relationships.

“I like writing songs about douchebags who cheat on me,” she sang her monologue. “I like writing their names into songs so they’re ashamed to go in public.”

You might think I’d bring up Joe, that guy who broke up with me on the phone, but I’m not going to mention him in my monologue,” she continued.

She then mentioned Taylor Lautner, who she was dating at the time, and blew him a kiss.

So who else does that leave? She could actually be talking about Lautner, since that relationship eventually ended. She was also linked to Jake Gyllenhaal a few years ago. And she could of course be speaking about John Mayer or Joe Jonas again.

Swift has never been shy about calling our her ex’s in her songs, so hopefully she will admit who “We Are Never Ever Getting Back Together” is about someday.

But in the singer’s defense, she also writes songs about her faults in relationships too.

“So this is me swallowing my pride / Standing in front of you saying, ‘I’m sorry for that night.’” she sang in “Back to December.”

No matter what, Swift seems truly happy now with new boyfriend Conor Kennedy. The 18-year-old grandson of Robert F. Kennedy will have to learn to treat Swift well, unless he wants a song written about him one day.