Just a month after his son’s death, Sylvester Stallone is finally out and promoting his new movie. 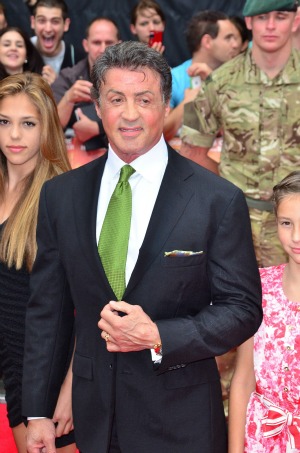 It has been just over a month since Sylvester Stallone’ son Sage was found dead in his California home. And today, the actor spoke out for the first time.

Stallone canceled all promotional appearances for his new movie after his son, 36, was found dead on July 13. The news of the death came just a day after Stallone appeared with his Expendables 2 co-stars at Comic Con. The other stars had since said they just wanted to give the grieving father some space and time to heal.

But this morning, Stallone finally sat down with Good Morning America to talk about the movie, and his loss.

“Time, hopefully, will heal, and you try to get through it, but it’s just something. It’s a reality of life,” he said. “I think it’s important to get back and start reliving your life. Otherwise, you can go into a spiral.”

He is surrounded by his co-stars from the movie, including Jean-Claude Van Damme, Arnold Schwarzenegger, Jason Statham and Dolph Lundgren.

“Its shoot-’em-up, knock-’em-out, high-flying plot focuses on a group of mercenaries who seek revenge for the murder of a friend,” said ABC News.

After Sage’s death, the actors in the film showed their support for their co-star.

“He knows we’re thinking about him,” Lundgren told Good Morning America. “He knows us. He knows our prayers go out to him. But what are you going to do? I have two kids. And all you can do is hug your kids and go thank God it didn’t happen to you.”

The Expendables brought in almost $300 million to the box office, and expectations for the sequel are high. Stallone co-wrote the film and recruited the other stars to participate.

The Expendables 2 opens on Friday.