After a romantic getaway to Bali, will the brunette beauty be celebrating her happy day with her new flame? 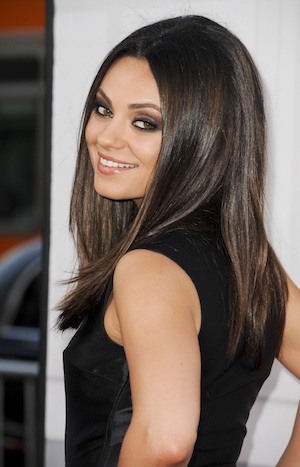 Mila Kunis turns 29 years old today and fans everywhere want to know if the star will spend her birthday in the arms of rumored boyfriend Ashton Kutcher. The pair have spent a lot of time with each other recently so it wouldn’t come as much of a surprise if the couple celebrated Kunis’ birthday.

They spent Sunday afternoon together as they grabbed lunch in Los Angeles, California. Kunis and Kutcher arrived and left separately but they dined together, says a source for the Daily Mail. Mila Kunis was also spotted backstage at Two and a Half Men, the hit television series starring Kutcher. (Kutcher replaced actor Charlie Sheen after Sheen suffered a public meltdown in 2011 and was subsequently fired from the show).

Mila and Ashton: Are they or aren’t they >>

Mila Kunis began her career as a child actor and appeared in a few minor roles in Days of our Lives and 7th Heaven. Her big break came in 1998 when, at fourteen years old, she was cast in the Fox sitcom That 70s Show as eighteen-year-old Jackie Burkhart, the spoiled and selfish girlfriend of Michael Kelso (played by Ashton Kutcher). The series ran for eight seasons.

Prior to her romance with Ashton Kutcher, Mila was in a serious relationship with former child star Macaulay Culkin. The pair split in 2011 after eight years together. Some media reports recently surfaced that Culkin still struggles with the aftermath of their failed relationship.

Ashton Kutcher and Mila Kunis were spotted last week as they hopped a return flight from Bali for what many speculate was a romantic vacation. Kutcher and Kunis were photographed as they held hands and they looked tan and casual in the airport.

No word yet on Mila Kunis’ birthday plans and if she plans to party with Kutcher.