Scotty McCreery’s body — and his ego — got a few bumps and bruises after he fell off stage during a concert. 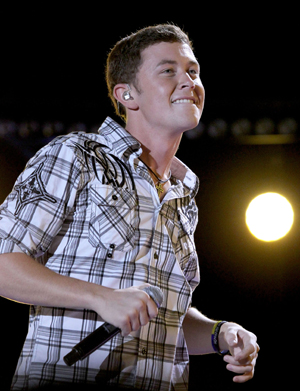 Scotty McCreery rocks out so hard in concert. How hard? So hard that he doesn’t even notice when he’s about to fall off the stage.

Yep, that really happened during a Friday night concert in upstate New York. The American Idol winner fell off the stage, but he quickly picked himself back up and resumed performing.

Quite the professional, right?

He even joked about it afterward, posting a video of the fall on Twitter with the commentary “If anyone wants a good laugh…”

We love people who can laugh at themselves. Still, McCreery did try to place blame — jokingly, of course.

“Dagum @bradpaisley pranked me again.. he narrowed up the stage on me for my last song…..#Meethecrowdnight @Imok,” he tweeted.

McCreery is opening for the hitmaker on his current tour — and Paisley didn’t let him forget his fall.

“@bradpaisley wanted me to be extra catious tonight! Thanks Brad!” he tweeted, along with a photo of the stage covered in orange caution tape and safety cones.

The recent high school graduate is riding high on the success of his hit debut album, Clear as Day. However, he’s not putting education aside for music.

“I’m planning on continuing to work on my music, definitely,” he told GAC.com earlier this month. “I’m going to college (North Carolina State University) in the fall, and I scheduled my classes mostly for Monday and Wednesday so I can reserve Thursday, Friday, Saturday and Sunday to do as many shows as I can in the fall. It’ll be different and I’ll have to get used to it, but I think it’ll work. We’ll see.”

Wow, talk about dedication! We just took naps when we didn’t have class. Thanks for making us look lazy, Scotty.