Christina Aguilera showed off a gaudy new purple hair color while on a press junket for The Voice. 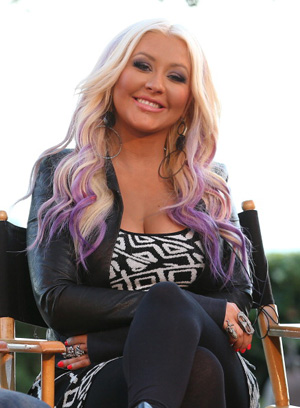 We’re used to seeing Christina Aguilera’s hair look a lot like the photo above — lots of bleach blonde locks loosely curled on her shoulders. Well, something must be in the water in Hollywood, because the singer followed Miley Cyrus’ lead and changed up her hair.

Aguilera’s new hair color — seen here — is basically blonde with some lilac highlights added in. It’s dreadful. Something about the color is not sitting right with us. Then again, I pretty much hate Aguilera’s style in general — it’s all just too much with the short outfits, the cleavage and the heavy makeup.

Not that The Voice judge cares what we think: She loves her look.

“I’ve been in this for a long time. I came out on the scene when I was 17 years old,” she said in January. “‘You can never be too much of anything. You can never be too perfect, too thin, too curvy, too voluptuous,’ this, that. I’ve been on all sides of the spectrum. [Every] female in this business at one time or another has had criticism… and I’m always a risk taker too.”

“I’m very confident in my body,” she continued. “I think my video works over the years have spoken to that… I’ve been no stranger to being very comfortable in my own skin.”

Speaking of Cyrus, the actress continues to show off her new shorn ‘do on Twitter.

“My dad @billyraycyrus used to tell me ‘opinions are like a**holes every body has one’,” she tweeted on Sunday after. “LOVE my hair, feel so happy, pretty and free.”

Tell us: Are we wrong about Christina Aguilera’s hair? Do you like it?