Evelyn Lozada broke her silence on the arrest of Chad “Ochocinco” Johnson for allegedly head-butting her last weekend. Will she get back together with him? 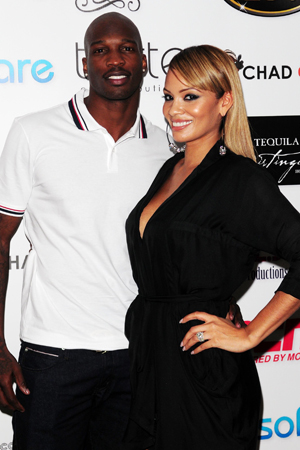 Think Evelyn Lozada is going to take her husband of five weeks, Chad “Ochocinco” Johnson, back after he was arrested for allegedly head-butting her? It doesn’t sound like it. The former Basketball Wives star spoke out on her husband’s arrest with language that makes us think she’s about to call it a day on this relationship.

“I am deeply disappointed that Chad has failed to take responsibility for his actions and made false accusations against me,” she told Entertainment Tonight on Tuesday.

“It is my sincere hope that he seeks the help he needs to overcome his troubles,” she continued. “Domestic violence is not okay, and hopefully my taking a stand will help encourage other women to break their silence as well.”

To make matters worse, Lozada’s brother-in-law passed away from cancer on Monday.

“Anthony was an amazing husband, father, and brother-in-law. He will be dearly missed,” the reality star told TMZ of Anthony Ochoa, the husband of her sister, Sylvia. He also walked her down the aisle at her wedding to Johnson.

It looks like both of them will have some time to reflect on the fight over a condom receipt: VH1 has opted to cancel their reality show Ev & Ocho.

“Due to the unfortunate events over the weekend and the seriousness of the allegations, VH1 is pulling the series Ev and Ocho from its schedule and has no current plans of airing it,” the network said in a statement Monday afternoon.

Update: Lozada has filed for divorce from Johnson after 45 days of marriage.

“Given recent events in my client’s life, she has decided to file for divorce and move forward with her life,” Lozada’s lawyer Michael Gilden told the New York Daily News.