Gabby Douglas gets into hot water with First Lady Michelle Obama during her nervous appearance on The Tonight Show with Jay Leno. 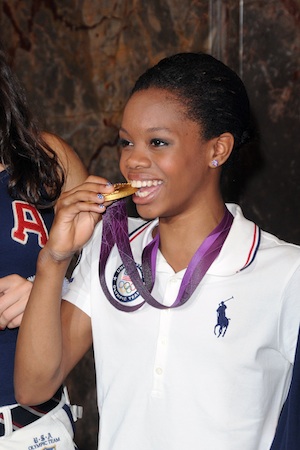 First Lady Michelle Obama had some choice words for U.S. gymnast Gabby Douglas during Monday night’s episode of The Tonight Show with Jay Leno. The sixteen-year-old Douglas admitted she “splurged” on McDonald’s after her gold medal routine at the London 2012 Summer Games. The First Lady — who was appeared first on the show — jokingly scolded Douglas. “Maybe a whole wheat McMuffin,” said Michelle Obama, as Jay Leno seemed intrigued at the meal. As Leno and Douglas joked over Douglas’ celebratory move, the First Lady cautioned her. “You’re setting me back, Gabby.” The teenage gymnast quickly replied, “Sorry!”

First Lady Michelle Obama is known for her commitment to healthy nutrition and exercise. Her Let’s Move campaign launched in 2010 and aims “to bring together community leaders, teachers, doctors, nurses, moms and dads in a nationwide effort to tackle the challenge of childhood obesity,” according to the White House.

Monday night marked Gabrielle Douglas’ first appearance on The Tonight Show with Jay Leno and the petite teenager seemed excited and a bit nervous. When asked by Leno if the experience of winning a medal was what she envisioned after a lifetime of training and dedication, Douglas inadvertently insulted Leno. “I think it’s very different, and when I mean ‘different’ it’s in a better way,” said Douglas. “I mean, I never thought I would be doing the show with the first lady, or even you, Jay.” First Lady Michelle Obama jokingly jumped in, “Even you too, Jay!”