Shocking aerial attacks lure us in, but it’s the snippets of trivia that keep us anchored to our sofas during Shark Week. As it turns out, many of the pearls of wisdom regarding nature’s most ferocious fish can be applied to life in general. 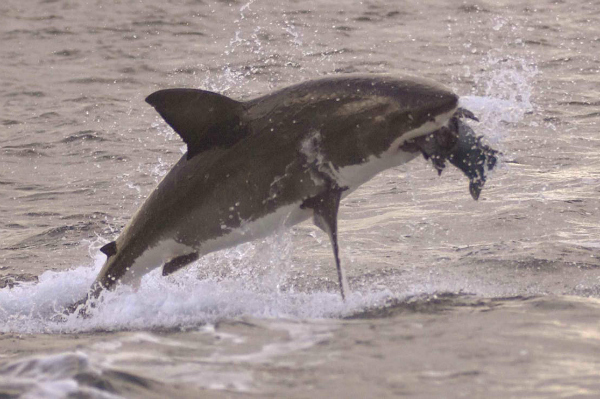 You gotta keep on movin’

It’s no secret that if you stop, life will move right on by without you. For certain shark species, though — great whites, makos and salmons — life actually stops right along with them. These specific sharks lack the muscles needed to keep water pumping over their gills, so a brief respite leads to drowning. Why not take a cue from these gilly guys and just keep on truckin’? Forward momentum isn’t just for the finned.

Things aren’t always as scary as they seem

Nothing dampens a fun day in the surf like something brushing across your leg (and they say walking on water isn’t possible, heh!), reminding you that Jaws is lurking below the surface just waiting to drag you to a watery tomb. In reality, only 5 to 10 reported attacks each year prove fatal. So, see? Those things we fear most are not nearly as sensational as we imagine them to be. That spider skittering across your floor probably isn’t an unknown super-species, and it’s unlikely you’ll get botulism if you nosh from the community peanut bowl at your local watering hole.

It’s long been rumored lunar cycles can lead to odd behavior — I cite the legend of the werewolf as Exhibit A. If full moons make you feel superstitious, you may be on to something. Science has proven that sharks are strongly affected by the phases of the moon, which control ocean tides. During certain lunar cycles, sharks are drawn closer to shore, thus making attacks on humans more probable. My take on this phenomenon? When the full moon’s at bay, at home I shall stay.

Someone always has it worse

At six months pregnant in the midst of one of the most stiflingly hot summers on record, I find the idea of suffering through one more trimester akin to cruel and unusual punishment. Leave it to Shark Week to remind me that no matter how bad I think I have it, someone else’s plight sucks more. Did you know the gestation period for a preggers shark can last up to two years?! Plus, I get all bejiggety watching TLC’s Make Room for Multiples, but whale sharks have been known to carry 300 live pups at once. Wowza. The Duggars ain’t got nothing on these fertile fish.

Great white sharks have essentially done without surgery what humans attempt with gastric bypass: teach their bodies to eat only what meets their nutritional needs. Because their diet mandates loads of fat, great whites will swim away if they nibble a morsel of meat too lean. We’d much rather mimic these picky predators than take on the traits of some of their kin… blue sharks are gluttons who gorge, puke, and pick right back up with the perpetual buffet.

Sometimes life hands you lemons. Or lemon sharks. If you find yourself at the short of the proverbial stick while wading in shark-infested waters, keep your wits about you if you’d like to keep your limbs about you. When a shark chomps down on its prey, it thrashes it around to break off chunks of meat. The secret to sustaining your extremities, then, is to wrap your arms around the shark and hold on for dear life. While you and the shark are spooning, give the ferocious fish a love tap or two (or twenty!) in the eyes, gills or — better yet — their sensitive schnoz… sharks don’t like to have to work for their lunch.