Instead of dispelling rumors first planted by the National Enquirer, Macaulay Culkin’s estranged dad and stepmother are fanning the flames that the Home Alone actor is, indeed, in a losing battle with heroin addiction. 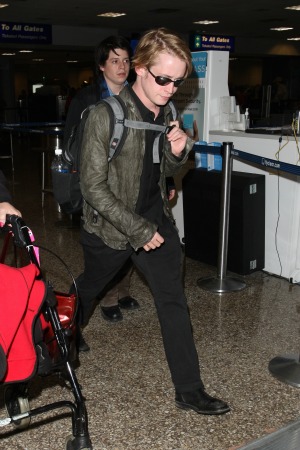 A distraught Kit Culkin, who has battled heart problems recently, expressed concern over son Macaulay’s emaciated appearance, telling U.K.’s The Sun: “I hope that he has the right people looking after him.”

The 60-something father’s words are particularly bittersweet, given that The Huffington Post reports Kit has been estranged from his son for 15 years.

The publication notes that Macaulay fired his dad (and then-manager) over his parents’ squabbles to control the Home Alone star’s fortune.

In fact, since 1997, Kit has only known his son in pictures — like most of the rest of us.

So you can imagine when photos first started to surface earlier this year, featuring a gaunt-looking Macaulay, that dad put their rocky history aside and went into panic mode.

According to The Sun, Kit got so choked up when asked to address the photos of his 31-year-old son, that his wife (and Mac’s stepmom) had to speak on his behalf.

“Oh, gosh. Kit has seen the photo, but he can’t talk about it,” Jeanette Krylowski told The Sun. “He just can’t, because it hurts him too much. Of course he’s worried, he’s incredibly concerned.”

“When I saw the photos I thought, ‘Oh no, this is not good. Either he’s dying of some disease or he’s heavily into drugs.’”

Reportedly, the couple has suspected Mac was hooked on the really bad s*** for some time now. It’s been speculated the child star spiraled after his split with girlfriend of eight years, Mila Kunis.

But Mac’s rep has said otherwise, slamming claims that the actor is “addicted to heroin and assorted hallucinogenics” as “not only categorically without merit,” but also “impossibly and ridiculously fictitious.”

Jeanette seems to think that’s B.S., telling The Sun: ““Now we’re hearing he is denying the allegations — but it certainly looks like he is on drugs. He looks awful.”