Jeremy Renner is A-okay with gay rumors, and in fact considers the gossip to be a sign of his status. Now if only he could be so chill when it comes to the “stupid” Kardashians! 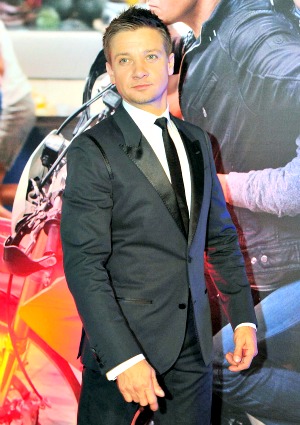 Jeremy Renner gay rumors aren’t the worst thing to ever happen to The Bourne Legacy star. As a matter of fact, they’re almost complimentary these days for an actor trying to launch a career!

Explaining his silver-lining outlook to the UK’s Guardian, Jeremy Renner said he knew he was a bona fide part of showbiz when gossip about he and his best friend/business partner hit the papers.

“I talked to some other friends of mine about the rumors when I first heard them,” the 41-year-old recalled. “I said, ‘Have you seen this?’ and they were like, ‘Dude, do you know how long that’s been online?’ Look up any actor and it’s the second thing that comes up. So I have gay rumors — guess I’ve made it!”

Although, Jeremy Renner is quick to point out, fame wasn’t ever what his sights were set on, stating, “I know it’s a cliche but I never wanted to be famous. I don’t believe anybody wants to be famous.”

At the mere mention of the name “Kardashian” the actor proceeds to roll his eyes and let his true feelings fly. “Oh, all those ridiculous people with zero talent who spend their lives making sure everyone knows their name,” Renner ranted. “Those stupid, stupid people.”

As with the gay rumors, Jeremy Renner isn’t alone in holding some Kardashian hate down in his heart. Actor Jon Hamm stood by his “stupid” remarks, Jason Statham dished a Kardashian burn and even SNL has had a go at the supposed reality television royalty!