Not since Sarah Palin stumbled when asked by Katie Couric, “What newspapers do you read?” has there been so much interest in what’s on a politician’s bookshelf (or Kindle). 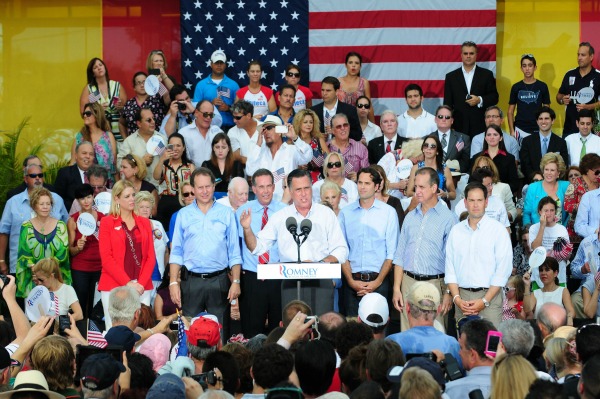 On Tuesday morning, a Russian-American novelist who’s been dead for more than three decades was trending. Why? We need only look to Mitt Romney‘s VP pick: Paul Ryan.

The already-contentious pick is — or at least used to be — a fierce “Randian.”

Ayn Rand, who wrote Atlas Shrugged and The Fountainhead, has long been a controversial figure; the New York Times critic Harriet Rubin bluntly called her works a “glorification of the right of individuals to live entirely for their own interest.”

Critics of Paul Ryan’s budget plan have insinuated the same thing about the rep’s work: The plan essentially takes a ball bat to social welfare programs developed to help those in need.

Back in 2005, (ex?) Randian Paul Ryan gave a speech at The Atlas Society, according to ABC News, where he admits to Rand’s philosophy as guiding his approach toward monetary policy.

“I grew up reading Ayn Rand and it taught me quite a bit about who I am and what my value systems are,” ABC News reports he told the Ayn-worshipping group. “It’s inspired me so much that it’s required reading in my office for all my interns and my staff.”

Reportedly, he has since denied forcing his staff to read the contentious novels.

Ryan continued, by way of ABC: “But the reason I got involved in public service, by and large, if I had to credit one thinker, one person, it would be Ayn Rand. And the fight we are in here, make no mistake about it, is a fight of individualism versus collectivism.”

But in April, there was a turnabout. Courtesy of the National Review, Ryan said: “I reject (Rand’s) philosophy.”

So why is Ryan shrugging off Rand at a time like this?

In addition to celebrating greed and selfishness (it appears Ryan doesn’t have a problem with this), author Gary Weiss, by way of CNN.com, said Rand was also opposed to notions of “Judeo-Christian morality.” She was also “a militant atheist who favored abortion.”

More left-leaning types have long singled out Rand as a “wedge” between factions within the Republican party — more “Libertarian” types vs. the Christian Right.

Ryan apparently had a change of heart about Rand, further telling the National Review: “It reduces human interactions down to mere contracts and it is antithetical to my worldview.

“If somebody is going to try to paste a person’s view on epistemology to me, then give me Thomas Aquinas, who believed that man needs divine help in the pursuit of knowledge. Don’t give me Ayn Rand.'”

The mere fact that Ryan’s Randian roots have been featured so prominently in recent discussion spells trouble for the GOP, according to Weiss.

“It could put him at odds with the Christian right and the Roman Catholic Church,” he said. “It all depends how much you believe that he is in the thrall of Ayn Rand.”

Particularly in an election year, this discussion is so much more than an individual’s “personal choice” with regard to literary selections. It provides insight into a candidate’s worldview, which guides decisions that could have implications for millions of people, including the most unfortunate among us. Being in the thrall (allegedly) of a divisive figure like Rand can no doubt polarize a political base.