Kris Jenner dead? Heck, no! She’s just the latest victim of the celebrity death hoax trend, an “awkward” situation, according to the one and only Kim Kardashian. 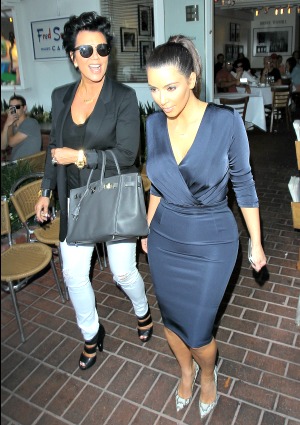 “RIP Kris Jenner” the tweets read Monday night, causing alarm for some, confusion for others, and a few good laughs for the Kardashian clan! Go ahead and laugh, too. Kris Jenner hasn’t died.

Upon hearing word that her mother was a trending Twitter topic, Kim Kardashian wrote to her oodles of followers, “The awkward moment when ‘RIP Kris Jenner’ is trending yet I’m the phone with her! LOL”

Khloe Kardashian, however, has been having a much harder time getting ahold of her own momager. “I think my mother has officially abandoned me LOL this woman has been yachting it up in Europe,” she joked. “No phone calls. Nada!”

“I think I might lower @KrisJenner commission to get her attention,” she added Monday.

By Tuesday morning the message had done its duty, as Kris Jenner replied to Khloe, “WHOA there missy I’m on vacay!!!!! I love you khloe!!”

The frequency of Twitter death hoaxes isn’t going unnoticed by social media users. A sampling of tweets from the public reads:

“RIP Kris Jenner” is a TT. Seriously, the amount of people Twitter has killed off could give voldemort a run for his money

Celebrity death hoaxes do seem to be getting a bit out of hand, don’t they? Perhaps there’s a ‘cry wolf’ lesson to be had here, though. One of these times “RIP Kris Jenner” (or another unfortunate celebrity name) will actually be true!

Did you fall for the fake Twitter reports stating Kris Jenner died?