Lady Gaga didn’t exactly help her situation with PETA (or her fans) when she tweeted a response to the uproar generated by recent photos featuring her in what appears to be fox and rabbit fur coats, and portions of a wolf draped around her for a promotional shoot. 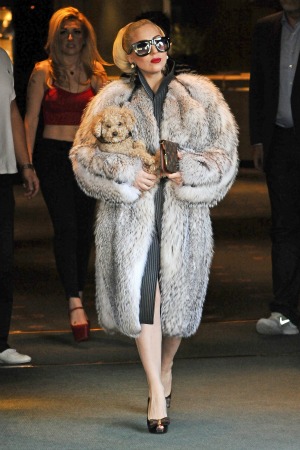 If you went to Lady Gaga’s Twitter page looking for an “explanation” following PETA’s threats to flour-bomb the pop star just like Kim Kardashian before her, you’d be sorely disappointed.

Gaga coyly tweeted to her 28 million followers: “For those press and such who are writing about whether or not my fur is actually real … please don’t forget to credit the designer HERMES. Thank You! LOVE, gaga.”

The tweet included a link to fan site, and many of her Little Monsters were less-than-impressed with Gaga’s response.

“i would try find the funny side if i didnt think the fur industry was such a disgusting tade…,” wrote one fan.

Another posted: “I love and respect you Lg, but which is it. You said you hated real fur but now you’re wearing it??”

Lady Gaga Now, an account boasting Gaga-oriented news (and some 147,000 followers) insisted that Gaga stayed true to what she famously said on Ellen — that she hates fur and doesn’t wear it.

“The coat @ladygaga was wearing in Sofia today was made with high pile fur for the Hermès Fall 2012 Collection,” read the Lady Gaga tweet, referring to faux high-pile fur. “You can stop now @peta.”

For the time being, Gaga’s sarcasm (?) isn’t helping her case.

It’s one thing to ruffle PETA’s fur, but even her fans seem perplexed.

How quickly we forget, though: This is the same woman who wore a dress made out of meat to the 2010 MTV Movie Awards.