Gone are the days of watching Miley Cyrus giggle with girlfriends on Hannah Montana. With her new haircut creating major buzz, it’s clear Miley is all too eager to usher in a new era… one which is decidedly more grown-up than her Disney days. 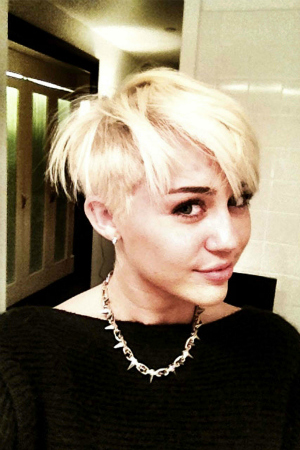 When Miley Cyrus made the decision to leave Hannah Montana behind in 2010, she must have figured it was better to go out with a bang than a whimper. Instead of slowly wading out of teen queen territory, the saucy celeb dove straight into the deep end by debuting the video for her prophetic single, “Can’t Be Tamed.” And by video, we pretty much mean soft-porn performance. Mothers of Miley’s young fans went all mama bear on her a** for being a bad role model, but Miley forged ahead with her risqué behavior. With several sexy Twitpics and an ample sample of side boob exposure under her teeny tiny belt, it’s probably safe to assume she succeeded in kissing her goody-two-shoes image goodbye.

It’s can be comical when little kids (read: 5-year-olds) have an opinion about everything. When the know-it-all is a 19-year-old diva in development, however, it’s much less amusing. Miley’s jump from mild-mannered Southern belle to trash talkin’ Twitter maven transpired faster than big papa Billy Ray could butter a biscuit. She waged her first war of words when she accused Urban Outfitters of being shady and anti-gay, and the outspoken singer/actress has since enlightened us on everything from Casey Anthony to crude fans. And we’re betting the Bible Belt-bred starlet had a great granny rolling in the grave when she tweeted people should forget Jesus and instead thank exploding stars (the celestial kind) for life… why I neva! 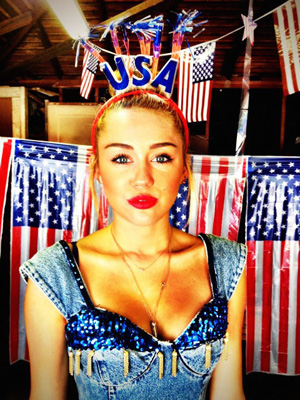 It looks like Miley most likely stashed much more in her luggage than a dream and a cardigan en route to LAX — as it turns out, feeling comfortable in the big city probably had more to do than being bong-blitzed out of her brain than the songs the DJ was spinning. But, oh wait, what am I thinking? It wasn’t pot Miley got caught smoking, it was salvia! That totally makes it legit when she swears she isn’t a complete pothead. You’re right, Miles! The hasheesh you’re smoking is actually is a hallucinogen as potent as LSD… that makes you more like the misguided girl on Intervention who rationalized that huffing Cool Whip from the can was perfectly safe.

Miley Cyrus: On the express train to RehabVille? >>

Purity pledges: So 3 years ago

If all of the provocative Red Carpet outfits and suggestive gyrating didn’t clue you in, Miley’s admission that sex is beautiful should have tipped you off to the star’s sexual status. There’s also that little matter of getting engaged to Hunger Games hunk Liam Hemsworth, who does little to quell Miley’s sexual appetite. Although she once flaunted a purity ring, it’s likely the only ring she’s wearing these days (besides the one Liam put on her finger) is of the Nuva variety. Too much to process? Well, hopefully this won’t push you over the proverbial edge — rumor has it the 19-year-old already has baby fever. 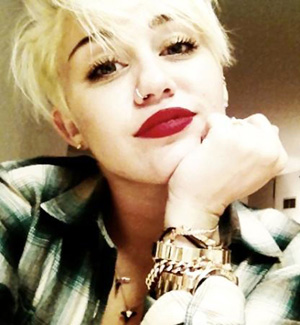 Mental metamorphosis aside, Miley has upped the shock factor over the years with the alarmingly rapid evolution of her look. Her now waifish figure, once defined by feminine curves, often elicits irrational urges to hunt her down and force-feed her hamburgers. OK, maybe that’s just me, but I’m definitely not the only one taking note of her protruding clavicle. Add a few tattoos and the instantly infamous haircut heard round the world, and it appears as though Miley wishes the witness protection program had a branch for Disney darlings looking to outgrow their good girl personas.