Rashida Jones isn’t waiting for John Travolta to come out of the closet — she’s calling on him to come out! Problem is, in case she hasn’t heard, he either isn’t gay or very much likes staying in… thank you very much. 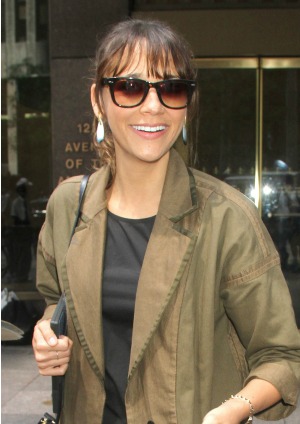 Rashida Jones wants John Travolta to open up and say “I’m gay” — now! The actress has put herself into another star’s business by telling a reporter the actor ought to come out of the closet and serve as an example to others.

The outing all began when the actress sat down for an interview to promote her latest movie, Celeste and Jesse Forever, alongside writing partner and ex-boyfriend Will McCormack. Speaking freely, Rashida Jones chatted about her obsession with singer Frank Ocean, who bravely came out last month.

Chiming in, Will McCormack told SpinningPlatters, “There needs to be, like, a professional athlete that comes out.”

Rashida Jones then one-upped him, adding, “And a movie star! It’s time… like John Travolta? Come out! Come on. How many masseurs have to come forward? Let’s do this.”

Delving into the topic of coming out, she went on to dissect why recent “I’m gay” announcements haven’t been headline news like their predecessors.

“Anderson Cooper is a TV personality. Like Neil Patrick Harris — okay, yes, it’s great that he came out, but (A) these are both men who have lived in the gay community for a long time and I think everyone suspected, and (B) there’s something about these iconic stars, people who are almost godlike,” Rashida Jones reasoned.

“Because with someone like Frank Ocean, yes, it’s fantastic that he did what he did and his letter was so beautiful, and he’s in such close proximity to all these rappers so he’s battling homophobia just by being honest. But big stars need to come out. Ricky Martin was huge. That was big; I was really happy about that,” she added.

“People are so precious about their careers.”