Chad Johnson has a few more problems on his plate stemming from his weekend arrest on domestic violence charges: He’s lost both his VH1 series and his spot on the Miami Dolphins roster. 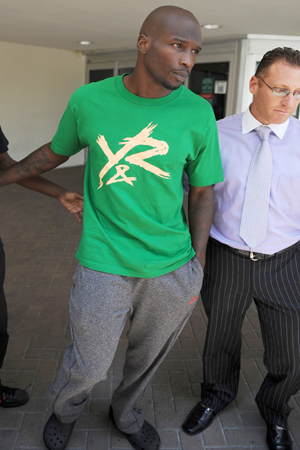 We hope Chad “Ochocinco” Johnson is feeling pretty stupid right now: The football player has lost both his wide receiver position with the Miami Dolphin and his reality show was canceled. All of this happened because he (allegedly) couldn’t resist head-butting wife Evelyn Lozada in a fight over a condom receipt.

“Due to the unfortunate events over the weekend and the seriousness of the allegations, VH1 is pulling the series Ev and Ocho from its schedule and has no current plans of airing it,” the network said in a statement. The show was slated to start airing next month.

The announcement followed a tweet from the Dolphins saying they decided to kick Johnson from the team. “The Miami Dolphins terminated the contract of WR Chad Johnson, the team announced today,” a rep for the team tweeted, adding that it wasn’t just that incident that led them to cut him.

According to the New York Daily News, Johnson and Lozada got into the heated argument outside their Davie, Florida home. “Lozada emerged from the car with a ‘pretty good-sized’ laceration on her head and was later taken to the emergency room at the West Side Regional Hospital, where she was treated,” NFL.com noted. Other reports said she left the hospital with a 3-inch gash on her forehead.

Why so violent? Johnson hasn’t really shown a proclivity to violence before this (that we know of). He’s usually out there, but not like this. Case in point? His meltdown earlier this summer over the loss of his Starbucks gold card.

He eventually got his wallet back — and Starbucks sent him a new gold card.

“I wish Tyrannosaurus Rex diarrhea on whoever broke my window and stole my #gold starbucks cards…” he tweeted.

Can we get that weird Chad back? The violent one is scary. Really, really scary.