Lindsay Lohan is now worth $2 million. The small fortune is a major increase for the struggling star — in 2004 Lohan was reportedly worth over $30 million when she was just 18 years old. 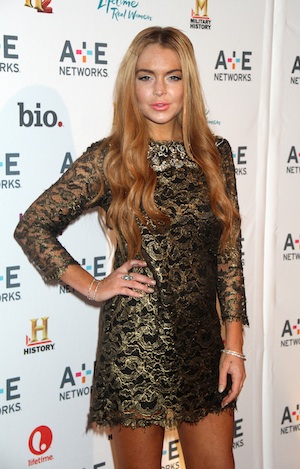 So far in 2012 Lindsay Lohan received $1 million for her Playboy pictorial and $300,000 for Lifetime’s Liz & Dick. Thanks to these career moves Lohan is now on her way to financial stability after several years in serious debt.

The public first learned of Lindsay’s money problems in 2010 when Lohan faced several lawsuits from different companies that claimed Lohan refused to pay for services. RadarOnline reported Lohan was so broke she owed $600,000 in credit card debt and TMZ said Lindsay faced eviction from her $11,500/month rental home in Hollywood because she was months behind on her rent. Her well-known drug and alcohol addictions fuel Lohan’s desire for constant partying and even though Lohan lacked income — her last substantial role was Mean Girls (2004) — she continued to spend major cash on a luxurious lifestyle.

In 2011, Lohan was sued for $90,000 in unpaid limousine fees for services rendered in 2009. That same year Lohan reportedly dropped over $30,000 for rehab stays, $80,000 for a new Porsche and a whopping $1 million at her favorite spot Chateau Marmont. In 2010 her net worth dwindled to just over $100,000 — a figure she used in court to explain her failure to attend therapy. In late May of 2012, Lindsay Lohan faced yet another lawsuit when a Nevada tanning salon claimed the actress skipped out $40,000 worth of services. Even though a judge ruled in favor of the tanning salon and ordered Lohan to pay immediately, the tanning salon was forced to go after Lohan’s assets for payment.

In October 2010 Lindsay Lohan spoke with Vanity Fair and admitted to major financial woes. “I was 18,19 — with a ton of money and no one really here [in Los Angeles] to tell me that I couldn’t do certain things… and I see where that’s gotten me now, and I don’t like it.” Vanity Fair said Lohan constantly read tabloid magazines and idolized celebrities. Lohan said, “I would look up to those girls… the Britneys and whatever. And I would be like, ‘I want to be like that.’ “